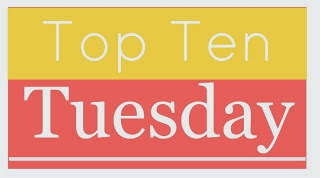 OMG, where to start with this topic?? I actually have a whole shelve on Goodreads dedicated to all the new series that I want to start and it has WAY more than 10 series on it...

1. The Winner's Curse (Winner's Trilogy) by Marie Rutkoski: I've heard REALLY great things about this book and should definitely get started on the first book soon!

2. Also Known As (Also Known As) by Robin Benway: This just sounds like a super fun series and I need a little light reading every now and then.

3. Falling Kingdoms (Falling Kingdoms) by Morgan Rhodes: treacherous betrayals and secret alliances sound like my kind of thing always. Also: the cover is so pretty!

4. Venom (Secrets of the Eternal Rose) by Fiona Paul: it's about Renaissance Venice!! Also, Fiona Paul is awesome, I loved The Art of Lainey she wrote under the penname Paula Stokes.

6. The Lost Hero (The Heroes of Olympus) by Rick Riordan: I still can't believe I haven't started this series yet. The only good thing about it is that by the time this TTT goes live, the last book will be released and I can just BINGE my way through it. Hopefully.

8. The Lies of Locke Lamora (Gentleman Bastard) by Scott Lynch: I love a good fantasy and I've heard AMAZING things about this series, so I need in on the action.

9. Outlander (Outlander) by Diana Gabaldon: I love historical fiction and this sounds SO good! And also, I want to read the book before I can watch the TV series and I keep hearing all these things about Jamie being total eyecandy, so I need to read this obviously so I can go on to ogle him.

10. Sabriel (Abhorsen) by Garth Nix: I really want to expand my knowledge of fantasy novels beyond what has been released over the last 5 years, and I've heard this series is basically a must read.