Paula wishes you all a Happy Turkey Day

At the beginning of October I got a new job. And I love it completely. However there has been one downside to it that is killing me. Here I am on week 4 with the same book. Granted it's A Feast For Crows so it's a long book- but still usually I would be long done with it and at least two others. By the time I get home from work all I want to do is crawl into bed without even glancing at a book. As a result I am now falling behind on my reading goal and will probably be finishing the year out with some graphic novels.

So in a quick post (so I can use my rare day of nothing to do to keep reading) I'll be listing my top 5 graphic novels/comic series. Consider it a mini TTT... but you know... on a different day... or something like that

1. Y: The Last Man by Brian K Vaughan - This was my first dive into things that weren't Mainstream comics and I judge everything I read on a scale from 1 to Y. It also introduced me to Vaughan who has written a majority of my favorite series (Runaways, Ex Machina, and his current story Saga)

2. Scott Pilgrim by Brian Lee O'Malley- The time in my life when I was reading this series weirdly paralleled a lot that happens in the series. So it holds a special place in my heart. And it is just so full of pop culture references and sweet moments and bitter sweet moments. I am so excited that he is now putting out a color edition of all the volumes AND that he has a new graphic novel coming out soon.

3. Superman: Red Son by Mark Miller- This is a standalone comic. Oh my gosh it rocked my entire world. The whole premise of it was what if Superman's ship landed in Russia instead of Kansas. It re-imagines a lot of DC mythos and characters. As a result you get this awesome dystopian crazy head trip Superman story.


4. Runaways by Brian K Vaughan- Oh no I already mentioned this series above. Am I allowed to put it on the list? It's a series that follows a group of teenagers who discover that their parents are super villains and who decide it's up to them to stop them. Of course things get out of hand and nothing goes quite right. And they have to decide whether they will be heroes or villains. My favorite part of this series? One of the characters has a psychically linked Velociraptor that protects her. It's like my dream come true. Annnd I love this series so much that I used some issues to make a pair of comic book shoes. Oooers time to show off: 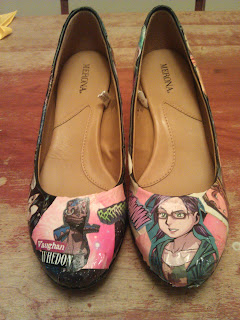 5. The Walking Dead by Robert Kirkman- I'm sure all of you have heard of this series now that the TV show has blown up. And although I've called it quits on trying to watch the show. I love this comic series. I love the world he has created and how it's less about "AHH LOOK ZOMBIES" and more about trying to retain what's left of humanity in a world that has torn apart. How sometimes humans who have been driven mad by the apocalypse can be a bigger threat than the zombies themselves. I will always look forward to the new trade of this series being released.


And if anyone has tips for reading on a 40+ hour work week. Throw them my way because I'm desperate here. Happy Thanksgiving  everyone. Hope your holiday is filled with joy (and tasty food!)