Launch Party for "Reached" and the fun that Kimberly had there.

My experience at the launch party for Ally Condie's "Reached" 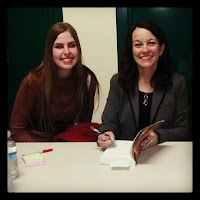 So a couple weeks ago I told you all about getting to go to the launch party for Ally Condie's Reached, that was a week ago today. I've been to multiple author events, but never a launch party. The King's English Bookstore hosted the event, and they did a fantastic job. They even organized a blogger's conference before the party where me and a few other bloggers got to sit and chat will Ally. It was me, Jessica from Cracking the Cover, Jessica from Books: A True Story, Jenni from Jenni Elyse, and Suey from It's All About Books.We loved talking to Ally who is an absolute delight. She is kind, and witty and a blast to chat with. I was madly scribbling notes the whole time, most of which are illegible. I   was able to decipher some of my horrendous handwriting, thankfully. Here is a brief account of our discussion. These are not all word for word. I can only write so fast. (Sorry)

Question: Was it hard for you to choose between Xander and Ky?

Question: How do you feel now that it is over?

Ally: It doesn't really feel done yet. I want to hang onto it, savor it for a while.

Question: The first book had a theme of poetry, the second was art... What's the third?

Ally: Music. I hope so at least! That's what I intended!

We talked about several other things, but you don't really want to read the whole thing, do you? Plus, I kinda got distracted by the conversation and forgotten about taking notes.

We asked her what she was currently reading and she told us she had just finished Michael Phelps' autobiography. She told us she had really enjoyed it, admired and was astonished at the amount of dedication it takes.

She also mentioned one of the highlights of Reached being released was that John Green had read Reached and really enjoyed it, AND tweeted about it!

After that we went to into the main room with everyone else, Ally had drawn in quite the crowd. (Which only made me feel even more spoiled that I'd been lucky enough to go to the bloggers conference.) 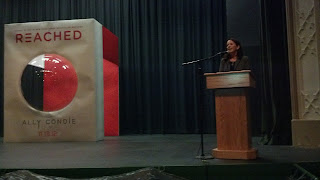 (Ally and the life sized version of REACHED)

Ally revealed a few other tidbits during the main event. One audience member asked about the movie. If you didn't already know, the rights to the Matched Trilogy has been purchased by Disney! She told us that she didn't have any input on who would play who but did say that if she had a choice Nathan Fillion would be in there somewhere.

Someone else asked who she liked best, Xander or Ky? She explained that she couldn't possibly pick a favorite because she had taken all of her favorite traits about her husband and given half to Xander and half to
When asked who her favorite character to write about she said that Indie was a surprising favorite.

She was asked if she typed or hand wrote her stories and she said that mostly it was typing, but if she ever gets stuck she pulls out a paper and starts writing it out by hand, once she gets back on a roll she switches back to the computer.

One of the last questions she was asked was what did she consider her greatest accomplishment? (Being published didn't count.) She replied that it was having a family, to her that is the greatest thing she's done.

I had a blast, it was exciting to be there, meet Ally and some more bookish friends. I'm not really sure how to wrap this post up, so here is a picture of me in the bubble of the cover of Reached. 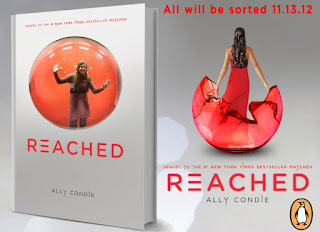 Email ThisBlogThis!Share to TwitterShare to FacebookShare to Pinterest
Labels: authors, dystopia, Kimberly, YA