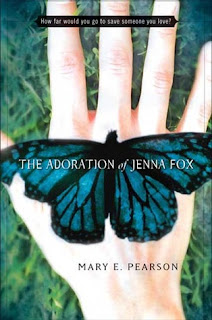 Jenna Fox has awoken after a year of being in a coma and doesn't know who she is. She has no memory of her past life in Boston, who her friends were, what happened during her horrific accident, and doesn't know why she woke up in California virtually hidden away by her family. Through videos, pictures, and stories, she slowly begins to remember herself, but can't always tell fact from fiction. Are these things she's imagining her own made up fantasies, or are they actually memories from her own life? As she tries desperately to remember herself and explore her past, she notices that her parents are hiding more and more secrets.

The book is set in the near future and poses a lot of scientific question and theories that could actually come to being one day. I won't giveaway the plot twist, but it's pretty interesting to think about and see how Jenna and her family deal with the ethical struggles it raises. The entire book isn't very cheerful, it's mostly desperate in tone (the desperation of Jenna's parent's, Jenna's desperation to find out who she is and also her desperation to reconnect with her cold, distant grandmother). The big question you are left with is: what would YOU do to save a human life, no matter the consequences?

I really enjoyed The Adoration of Jenna Fox overall; it was intriguing and had an interesting buildup. Still, I feel that it needed a little extra kick that would've made it complete. Jenna is a nice main character, it's easy to sympathize with her and be invested in her life and issues. 3.5 stars overall!