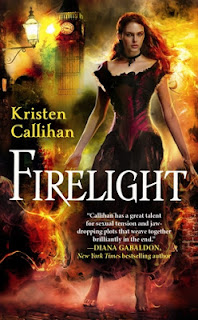 Title/Author: Firelight by Kristen Callihan
Publisher/Year Published: January 2012 by Forever
How I got this book: The Book Soulmates RAK (from a while back). I had it sent to me in the mail :)
Why I read this book: The author wrote a promotional blog around around the release date. It was as interview of the hero, Archer. The interview was written so well and sounded so appealing that I knew I had to get my hands on it.
Rating: 4.5 stars
One sentence Review: It's Phantom of the Opera meets Beauty and the Beast with a dash of paranormal a pinch of suspense and a sequel that's already in my hands.


For the romance novels I read, I like to take each part of what makes a romance novel and analyze it. I do this because sometimes a trope or a story line that worked for me may really not work for someone else. Or I happen to be a person who highly enjoys a well technically written novel. Others read it for the story no matter how horrifying the grammar rules are broken. So I came up with the SCORE: Story, Characters, Overview, Romance and Execution. For the purposes of flow, I flip the O and the E. Hope you enjoy.

Story:
This book takes us to a fun time towards the end of Victorian England. Most of the plot takes place in between balls and manor homes and the occasional seedy side of London. Miranda is a lovely lady whose father is horrid with money. Consequently, she ends up married to the mysterious Lord Archer who walks around wearing a mask within a mask hiding something that the reader nor Miranda knows. But she has a secret of her own, the ability to control and make fire.

There is a mystery afoot, and people keep dying in gruesome ways. It seemingly all points back to Archer. Miranda and Archer independently (and sometimes together to both of their consternation) try to find out how to stop it and prove Archer is not responsible.

The story is really interesting and unique, taking well loved tropes (like the masked man) and combining them into something new. That said, sometimes the story building was a little clunky, info dumpy or just confusing. As the reader, I sometimes felt that I wasn't given enough clear information to understand the rules of this world. Despite all of this, what is there is extremely addictive and quite enjoyable.

Characters:
The two leads I really liked. I thought they stood on their own and interacted together rather well. Sometimes they were a bit frustrating in their stubbornness, but it was part of who they were. I think the main leads were super well rounded, but some of the secondaries (and the mysterious murder) could have had a little more life in them. I felt very little at the big reveal with the villain because I didn't know them enough I guess. Again, this isn't something that I felt was too detrimental because what was there interacted with the story really well. Which leads me to my favorite part.

Romance:
Holy hell, was the tension palpable!! One of my favorite things in romance novels is when the author lets the sexual tension between the leads build and build. It just makes the eventual coupling that much more enjoyable. Miranda and Archer worked well together, and I thought they were a great leading team. The sexy times were definitely used well to build the tension, but not overused. Very good romance!

Execution:
Going back to what I said in the story section, I think that the execution has room for improvement, but to be honest, for a debut novel, this was great. I've read so many new authors who just lose it in the details or retell a story that has been told so many times it holds no interest. This is not the case with Firelight. It was a well known story mixed in with some super unique elements. I think how things were revealed to the reader could have been improved to make things a little clearer, but in general, it was not detrimental to my enjoyment. (Note from the future: I am reading the second book, Moonglow, now and the world-building improved drastically!)

Overview:
Before I was even finished with the book, I was at B&N getting the sequel for a plane ride. If you like masked men tropes, damaged hero, “fiery” heroines and mild suspense, this is for you. It was a refreshing change for me and I would give it a big recommend.