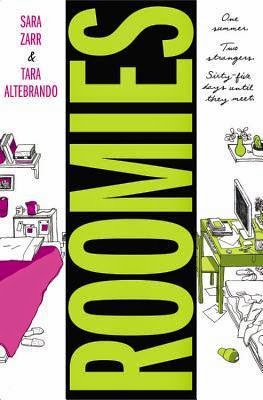 When Elizabeth (EB) gets the email with her roommate assignment for college in the fall, she immediately shoots off an email to introduce herself and ask about logistical things like microwaves and mini fridges. She is excited and very ready to leave her suburban New Jersey town for UC Berkeley in San Francisco, especially since her mother is driving her crazy. Plus, she might be able to finally see her gay father who moved to SF years ago. Lauren, on the other hand, is disappointed when she gets the email, since she had requested a single. She just wants to get some peace and be alone for once, as she is the oldest of six by at least 12 years. So their correspondence does not get off on the right foot, but eventually they start to open up to each other—perhaps too much.

When I started listening to this, I immediately was brought back to when I received my roommate assignment for college. It was a little different, as Facebook had just been released and you still needed a .edu email address to sign up for a page, and I didn't get an email address. I was just given a name and a phone number,  but I didn't have any qualms about calling Vanessa. As it turns out, I ended up talking to her mother for a while since she wasn't home when I first called, but eventually we caught up with each other and luckily we seemed perfect for each other. I still feel really lucky I got to have her as my roommate for two years! (Miss you, Vanessa!)

Anyway, back to the audiobook. Sara Zarr and Tara Altebrando do a great job of creating unique voices for their characters, though I'm not 100% sure of who wrote which. My guess is Zarr wrote Lauren's part, and Altebrando wrote EB's. Each girl had very different situations and drama she had to deal with at home, and they shared a lot of this with each other through email. As we all know, it can be MUCH easier to talk about something in writing with someone you don't necessarily know in real life, especially since they might not know the other people you're talking about. But because each girl actually has her own personality and set of morals, things get hairy.

Honestly I was super annoyed with EB for almost the whole second half of the book. She really seemed to be a brat for a lot of that to me, but then again I have never had to deal with the situations she does. Still, I was glad (relieved?) when she came around.

As for the narration, I thought it was good. Becca Battoe reads Lauren's part, and Emily Eiden reads EB's. Both voices were different enough that I had no trouble distinguishing whose part was whose, and for the most part they were easy to listen to. I especially liked Battoe's narration; her voice is pretty soothing.

All in all, I do recommend this book if you like realistic fiction, dual-voice narrations, and/or are feeling nostalgic about college or are excited for your upcoming college experience. It's a good, easy read with a bit of drama and some nice character development.

Disclaimer: I got this digital audiobook via OverDrive from the library.
Posted by Tahleen at 9:56:00 AM