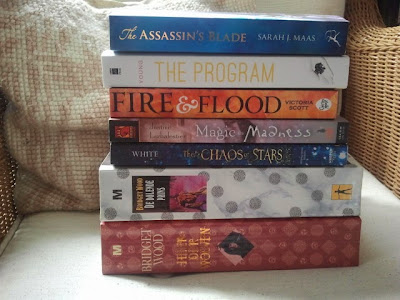 Bought:
-The Assassin's Blade by Sarah J. Maas: OBVIOUSLY I had to have this pretty bind up of the novella's!
-The Program by Suzanne Young: I've heard good things about it and I really like the cover! (Though I'm sad that they changed the cover for the sequel, because UGH now my books won't match when I buy it!)
-Fire & Flood by Victoria Scott: this sounds AMAZING! So I had to snatch it up :)
-Magic or Madness by Justine Larbalestier: I've been eyeing this for a while because I LOVE the title! And I've been meaning to read more fantasy novels.
-The Chaos of Stars by Kiersten White: it's Egyptian mythology. Consider me fascinated.
-Wolfking aka Heer der Wolven
The Lost Prince aka De Dolende Prins by Bridget Wood: I kept stopping and staring at these two books in the second hand part of the book store, they're not being printed anymore and I read them when I was about 12 or so, it's mostly for sentimental value that I bought them. And because they kept staring at me. 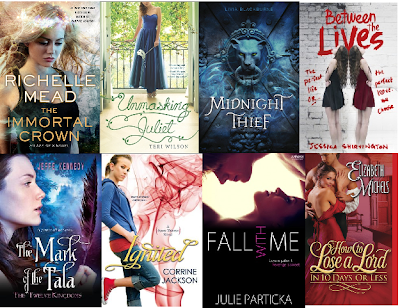 Egalleys for Review:
-The Immortal Crown by Richelle Mead: I really enjoyed Gameboard of the Gods and am excited to see what will happen in the sequel!
-Unmasking Juliet by Teri Wilson: I recently read Unleashing Mr. Darcy by the same author and it was a light, fun romance, so I'm hoping for the same with this one!
-Midnight Thief by Livia Blackburne: SO MUCH EXCITEMENT! This sounds like the start of an awesome fantasy series!
-Between the Lives by Jessica Shirvington: two lives, switching between them every 24 hours, YES PLEASE!
-The Twelve Kingdoms: The Mark of the Tala by Jeffe Kennedy: another YA fantasy series that sounds promising :)
-Ignited by Corrine Jackson: this is the final book in the Sense Thieves series and while I have some issues with it, I really want to know how it ends and if she ends up with the guy I'm rooting for.
-Fall With Me by Julie Particka: college romance that sounds like it could be REALLY GOOD.
-How To Lose A Lord in 10 Days or Less by Elizabeth Michels: I like the title and I'm always down for a good historical romance!
Posted by Daisy at 12:00:00 PM