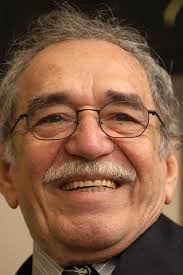 Gabriel Garcia Marquez died yesterday.  He was 87 years old.  He won the Nobel Prize for Literature in 1982.  He is known for pioneering the genre of magical realism in his many novels and stories, which are set in Latin America (a perfect landscape for this kind of story, if you ask me!).

I was in class, at the computer scanning documents for a project when the news flashed across my phone's screen.  I was instantly saddened.  I managed to block out the annoying voice of this other student to privately reflect on this literary giant and how much his literature means to me and to the world at large.

I've only read two novels by this literary giant--Love in the Time of Cholera and One Hundred Years of Solitude, but I was completely transported by his way of weaving together a story.  He created such deep characters in Love in the Time of Cholera and told such an incredible family saga in One Hundred Years of Solitude.  His sense of setting that came alive in his novels was truly magical and transported the reader right into the story.  Cholera taught me about a love that can last half a lifetime of separation and the true beauty and reality of love.  Solitude taught me about the tangled web of family and was thoroughly entertaining (and I need to read it again immediately!).

I've read bits of his biography.  It sounds like he lived quite a life and met some characters that influenced and appeared in his writing.  His fellow countrymen affectionately called him "Gabo."  What a fantastic nickname!

I am so glad that I am going by my parents' house today so I can grab copies of some of his other books and read them soon!

Here is a link to his obituary in the New York Times, in case you are interested.

Have you read anything by Garcia Marquez?  What did you think?
Posted by Lori at 11:32:00 AM