Each week we will post a new Top Ten list complete with one of our bloggers’ answers. Everyone is welcome to join. All we ask is that you link back to The Broke and the Bookish on your own Top Ten Tuesday post AND post a comment on our post with a link to your Top Ten Tuesday post to share with us and all those who are participating. If you don't have a blog, just post your answers as a comment.
If you can't come up with ten, don't worry about it---post as many as you can!

This week's topic:
Top Ten Dynamic Duos
These are the BFFs, partners in crime, powerful couples, and general groups of awesome people that I just can't get out of my head!  Next week--Top Ten Characters I'd Want As Family Members 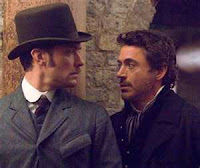 - these two are simply awesome. The down-to-earth normality of Dr. Watson nicely contrasts the quirkiness and general absurdity of Holmes. I can't think of a more productive pair of best friends!

series - [technically a trio, I know] even though these three are wizards and fight evil on a regular basis, these best friends are the most relatable to me. They fight, make fun of each other, have each others backs, and get into all sorts of mischief together. I wish I had them as friends!

4. Frodo Baggins and Samwise Gamgee from The Lord of the Rings

- I initially wanted to put the nine originals of the Fellowship of the Ring here, but since Frodo and Sam stuck together the longest and actually accomplished the mission, they win. [Side note: Google Image searching for 'frodo and sam' is very disturbing. People have sick fantasies.] 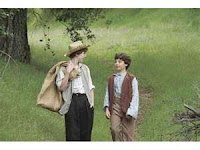 5. Tom Sawyer and Huckleberry Finn - I devoured The Adventures of Tom Sawyer

when I was younger. These two are another pair that are practically synonymous with each other, Mark Twain, and the Mississippi River. 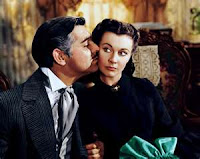 6. Scarlett O'Hara and Rhett Butler from Gone With the Wind

- admittedly, I've never read this book or seen the movie in its entirety. They are still very much synonymous like Mr. Darcy and Elizabeth, and even have a similar relationship. I always think of them when I think of the Civil War.

- We've been studying Shakespeare in my Brit Lit class and I've found a lot of dynamic duos in his writing, but Romeo and Juliet are likely the most famous. This couple was young, tragic, and everlasting. 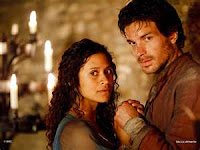 8. Sir Lancelot and Queen Guinevere - confession: I am obsessed with the BBC/SyFy show Merlin. This famous couple didn't exactly have the most ideal virtues (adultery, lies, imprisonment, exile, etc) but they still manage to scream romance to the rest of us. There are several great duos in Arthurian legend, but these two are my favorite. 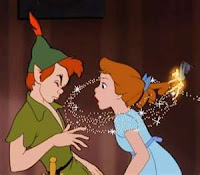 - my favorite classic childhood characters! I loved the adventures that Peter took Wendy on and wished I could join them. Of all the fairy tales/Disney movies, their tale is my most memorable.

10. Cathy and Heathcliff from Wuthering Heights

- yeah, these two are pretty psychotic, but they are still classic, so to speak. Their story is filled with love and romance, but mostly revenge, death, lies, and general crazy-person behavior. Still...I love to hate them.