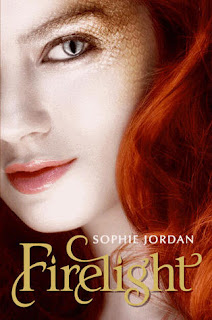 How I got this book: Bought it from Amazon.

Why I read this book: I liked the premise of a dragon falling in love with a human!

Mythical creatures in love with humans are all the rage right now… Vampires, mermaids, werewolves, fallen angels, beasts, fairies, immortals, etc. are flooding the shelves of bookstores everywhere. I had never heard of a story involving a dragon before, so I was quite intrigued. The story of Jacinda and Will grabbed me from page one and had me reading long into a night I should have spent sleeping instead of reading. I’ve often wondered if my bookishness is detrimental to my health and personal well-being, but I digress! Back to the subject at hand… I’m having a hard time reviewing this book, and I’m not sure why. I’ve written a review probably 5 times already, and I’m still not happy with it. Maybe it’s because the story has a lot in common with other YA Paranormal romances out there. I’m not saying it’s not worth the read, I’m just not sure what I can say about it that’s new, other than the fact that we’re dealing with dragons. I’ll try! Here’s the synopsis from Goodreads:

“Marked as special at an early age, Jacinda knows her every move is watched. But she longs for freedom to make her own choices. When she breaks the most sacred tenet among her kind, she nearly pays with her life, until a beautiful stranger saves her. A stranger who was sent to hunt those like her. For Jacinda is a draki—a descendant of dragons whose greatest defense is her secret ability to shift into human form.

Forced to flee into the mortal world with her family, Jacinda struggles to adapt to her new surroundings. The only bright light is Will. Gorgeous, elusive Will who stirs her inner draki to life. Although she is irresistibly drawn to him, Jacinda knows Will's dark secret: He and his family are hunters. She should avoid him at all costs. But her inner draki is slowly slipping away—if it dies she will be left as a human forever. She'll do anything to prevent that. Even if it means getting closer to her most dangerous enemy.

Mythical powers and breathtaking romance ignite in this story of a girl who defies all expectations and whose love crosses an ancient divide.”

Jacinda’s glowing orange skin and intricate wings are not all she has going for her. All Draki have a special talent. Some can breathe underwater, some can control human minds, and some can fly extremely fast. Jacinda breathes fire—a talent that was thought to have died out long ago before she was discovered. Thus, she is extremely valuable to pride. Things were planned out and set in motion for her to marry the Draki prince, Cassian, and create a ton of little fire-breathers just like herself. This unappealing future, mixed with her rebellious nature, mixed with the fact that she barely came home alive after being tracked and shot by a group of hunters prompted her mother to sneak Jacinda and her non-draki twin sister, Tamra, out of the pride and move to Arizona. Her mother chose Arizona because drakis can’t survive in such dry and barren conditions. Jacinda’s draki would eventually die off just like her mother’s, and they could live normal, safe lives as humans. Jacinda was not ok with this and did everything she could to keep her withering draki alive. Then, she saw Will—one of the hunters she encountered the night her mother forced them to flee. He was the one who stared into her draki eyes that night and let her go, leading his family of hunters away from her. They lock eyes in the hall at school, and an instant connection is made. He ignites the draki within her, and she captivates him for a reason he can’t quite figure out. Even though he’s the one who keeps her draki alive, she has to constantly fight her attraction to him (and resist his to her) and keep her distance. She can never let him know what she is without risking the lives of all those she holds dear. The hunters can never find out their best-kept secret—that draki can take on human form.
I really enjoyed this book! First off, how refreshing is it to finally have the girl be the paranormal one? Yes, there are a few mythical heroines out there, but we all know it’s usually the guy. It was fun to read how a girl deals with being different. Jacinda is SO driven by her emotions. She goes through highs and lows, and she’s always freaking out about everything. She’s not calm, cool, and collected like our mainstream paranormal heroes in other novels. I’m not saying she’s spastic and annoying. She certainly handled things better than I would have. I just enjoyed reading about her inner struggle rather than a guy’s, like I usually do.
This book moved really quickly! The tension built up fast, and I found myself trying to read faster than my brain could handle. There was no lollygagging in this book, and I really enjoyed that about it. I never got bored.
The romance between Will and Jacinda was believable, but maybe not for their age group. I never thought of them as high school juniors. They have a very mature relationship, which I was happy about, as I have a hard time enjoying the whiny teenage romances. Even though the romance did not seem realistic for their ages, the high school life was pretty real to me. I remember when I moved to a new high school, I struggled with fitting in. I was picked on. Jacinda went through the same motions I did, and I felt for her and could relate to how she was feeling. She was a total fish out of water, with only one friend who wasn’t even really a friend—more like a person to sit with and talk to. High school’s really hard, and Jacinda dealt with it.
Unfortunately, there were not a lot of characters to like in this book. There was an overabundance of villains: the alpha of her pride (who wanted her for selfish reasons), her mom (who lied to her frequently, and tried to kill off an important part of Jacinda), her sister (who should have tried to be more supportive of Jacinda’s situation), Will’s family (who were complete and total jerks to Will, and almost perverts towards Jacinda), the school bullies (who tried to make her life a living hell, and even attacked her). I’m not used to only liking the two main people. I guess the author chose to do this in order to emphasize the odds against Will and Jacinda, but I really wanted to like more people!

I loved that Jacinda was so true to herself, against all these odds. She didn’t just sit back and let her mother get what she wanted (a draki-free Jacinda). They argued and fought all the time. Her mom kept so many secrets from her, and then when she finally told Jacinda the truth, she wasn’t even nice about it. This woman is just not a good mother figure—and I found her character to be a bit hard to believe sometimes. I know she was trying to protect Jacinda, but she rarely ever showed any compassion, empathy, or even love.
For the most part, I enjoyed the writing style. Several reviewers have mentioned that the book was laced consistently with sentence fragments, which got rather annoying. I totally agree. This is definitely not a book for people looking for pristine literary writing. I had to re-read and re-think some of the passages, just because my mind was not following the choppy writing style. It helped to add to the suspense, but it detracted a bit from everything else. Other than that, the action scenes were done very well and the author’s descriptions left little to be desired. She gave me enough information to be able to picture everything in my mind, but not so much that my mind couldn’t take a few liberties and allow my creative juices to fill in the gaps.

So, why the 5-star rating? Good question. Regardless of a few complaints, I loved the premise, the story, the character development of both Jacinda and Will, the fact that Jacinda is such a likaeble heroine, the descriptive passages that painted pictures in my mind, the fast-paced storyline that kept my eyes glued to the pages into the wee hours of the morning, and the fact that now I think dragons are sexy. I must warn you, the book has a total cliffhanger ending. If you’re not the type to wait around for months and months to see what happens next, wait for the sequel, Vanish

, set to come out in September of this year.