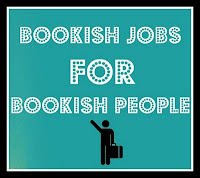 As a blog run by college aged kids, the thing most on our minds,  aside from books, is what the heck we are going to do with our lives. We  all joke and dream about having a job where we could read or blog all  day and feel pangs of jealousy when we encounter someone who does just  that. In my (Jamie's) job search, I've realized that there are so many  different types of bookish jobs out there that I had never even thought  about. In college I never thought I could be in the book industry  because I never wanted to be an author or an editor or a publisher. I  didn't think there was anything else out there. I've come to realize  that there so many types of bookish jobs out there for people of varying  strengths and abilities and I want to spotlight these jobs... and thus  began our monthly feature--Bookish Jobs For Bookish People.

As someone who frequently lusts over covers and runs amok in bookstores to see them in person, I'm really excited to introduce you to Tom from Harper Teen who has one of those jobs that I wish I could have...if only I was actually talented and artistic!

Job Title: Book Designer, Harper Collins Teen Division.  I'm responsible for designing the jackets (or covers if it's a paperback) and interiors of books for Young Adult and teen readers.

How long you've been in this position:

I've been a designer with Harper's childrens division since September 2008, and have been in the teen dept. since...hmmm...tough to say?  I was half-and-half with teen and picture books for around 10 months or so.  I've been teen exclusive since last January (2010).

What prior position(s) did you hold before this position?

What type of higher education or training do you have? What degree would the ideal candidate for  this position hold?

My degree is hardly ideal!  I have a BFA in Illustration from Syracuse University.  I actually didn't take one single design class in college, embarrassingly enough.  However, my first art director saw from my illustration portfolio that I knew how to "make things look good," and he was patient enough to teach me the rest on the job.  I actually know many graphic designers who have illustration degrees, but I suppose the best way to get in the field is to actually study design?

Describe what a typical day looks like for you:

Hmmm...it varies to an extent, because two days of the week we have morning cover meetings where we show other designers and editors the covers we're working on to get feedback and suggestions.  We also have a torturous Monday morning production meeting where we have to tell a roomful of people the status of our books.  Aside from that, I generally sit at my desk and either work on new designs or route jackets that have been going through the editorial and copy editing filter, making the necessary changes.  I also meet with my art director to get her ideas on books I'm working on, etc.  My day all depends on the urgency of projects.  Sometimes it's a house on fire, and sometimes I'm working on a dozen permutations of the same logo all day.

Three qualities/skills you should have to excel at this job:

Multitasking!  Attention to detail.  And a thick skin.  You just can't get discouraged or take it personally if a roomful of sales reps shoots down your jacket.  It happens to everybody and it largely has little or nothing to do with the quality of your designs.

What is your least favorite aspect of your job?

Definitely production meetings.  I'm still not sure why I can't just tell my immediate boss where my books are at.  I feel like they exist just to embarrass people who have projects running late.  They're time-eaters.

Biggest perk of your job:

Why free books, of course!  I read a ton, and Harper publishes lots of terrific mystery and crime authors, so it's gratifying to find, say, a whole set of Lawrence Block's Matthew Scudder Crime Novels on the basement free shelves.

Tell us one of your best or funniest memories on the job:

I would actually say that co-running my first model casting session.  I felt like David Hemmings in BLOW UP or something.  Like, I'm this sleazy creep in a suit looking through teenage models' portfolios and asking them questions.  It was one of those, "where has my life gone?" moments.  It was like I was dressed as "that guy" for Halloween...but I actually WAS that guy.  It was fun.

What do you think the biggest misconception is about your position/industry?

Hmmm...I can't say.  Maybe that we have less creative freedom than people would think and have to take many different voices (sales, upper management, authors, ediorial) into account when we're making a jacket.  It would be great if the buck stopped with the art directors, but that's only the first stop.

Complete this sentence. This job is not for you if... you have grand dreams of designing the next award-winning, innovative jacket.  At the end of the day, I'm happy if my covers look nice and I've pleased my bosses.  In teen publishing, you're generally REACTING to trends...not starting them, so for every one TWILIGHT jacket, there are 50 that are made to LOOK LIKE TWILIGHT.  If you're going to chafe at trying to tailor the look of your work to fit a current high-selling trend, then you should definitely look somewhere other than Young Adult publishing.

What advice do you have for people who are interested in your position?

Go into advertising design!!!!  More money there.  Nahhh...I would say that if you love books and want to design them, then keep looking at them!  Make sure you've got a strong awareness of the market and what kinds of books people are picking up.  Then maybe mock up some jackets that have that feel, if you haven't already.  Art directors are looking for people who have covers in their portolio that look modern and fresh.

And now for a bit of random...If you could switch jobs with one person for a week who would it be?

Absolutely, positively, without question a U.S. Marshal.  I've actually looked into the job requirements and I meet them all.  I still have three years (they don't take anyone over 36) to switch careers should I choose.


Thank you, Tom, for stopping by...and thank you for all the pretty, lustworthy covers that you have a hand in making. Harper Teen has some of my all-time favorites!


Check out Tom elsewhere on the web:

Personal website  - tomforget.com
Tumblr - http://gazellefamily.tumblr.com/
Blog for his work - http://tomforgetbulletins.blogspot.com
Collaborative Magazine That He Works On - mammalmag.com
Posted by Jamie at 12:24:00 AM