Tahleen reviews: "The Woman in White" by Wilkie Collins 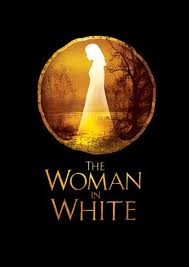 Title: The Woman in White

Author: Wilkie Collins
Originally published: In serial form in the magazine All the Year Round in 1859-1860, followed by its publication in book form in 1860.
Where I got it: I read this on my nook, receiving a free copy during a promotion of free classics this past year.

The Woman in White is largely regarded as the first "sensation novel," a cousin of sorts to the Gothic novel with a few tweaks here and there. Let me tell you, I really didn't know what to expect when I picked up this classic for a readalong in January. What a ride.

We start off with the narrative of Walter Hartright, a drawing instructor who is commissioned to instruct two young ladies in Cumberland, England at a place called Limmeridge House. But before he makes it to the country, he meets a distressed (and possibly disturbed) woman on the road near midnight as he walks home from his mother's home in Hampstead to his own place in London. He assists the woman, only to find out later that it might not have been the best of ideas. (I'll let you find out why on your own.)

Finally, with a bit of foreshadow and foreboding, he makes it to Limmeridge house, where he 1) meets Marian Halcombe, one of the aforementioned ladies, and 2) falls in love with her far more attractive (as well as weak and helpless, but I'll leave that for later) half-sister, Laura Fairlie. After finding out that Laura is engaged to be married to a man named Sir Percival Glyde, Hartright is convinced by Marian to leave on some kind of expedition to Honduras (!) on some sort of exploring adventure (to be honest I wasn't sure what the purpose of this trip was, besides getting rid of him, but whatever).

The narrative is switched from character to character as the plot progresses, and we get deeper and deeper into bad situations for the ladies and conspiracy that is just all-out nuts. The plot, though slow in the first half at times, really picks up around page 300 and crazy stuff starts happening. I found myself incredulous a few times, and I got quite nervous at others because I was afraid of what would happen. What is the Secret (that is always alluded to with a capital "S" in the text), and what does the mysterious woman in white know about it?

Let me just say that the villains are truly terrible, and yet fascinating, in this book. Percival Glyde is indeed a cad, a slimy brute who will do whatever needs to be done in order for his SECRET to remain secret and to get whatever money he can out of his wife. But the award for best villain ever goes to Count Fosco, with an honorable mention for his wife, Countess Fosco (and Laura's aunt). I often wondered myself about his intentions, if they were what we expected them to be or if Collins would just throw us another curveball—he is the type of character who ingratiates himself with everyone he comes into contact with and will not hesitate to ruin them if it will give him gain. And his wife will do just about anything he says without reserve or question, completely cold and calculated. They were chilling.

Perhaps the best heroine I've yet come across in Victorian literature is Marian Halcombe (if not the best, then at least in the top 3). Though Collins makes it incredibly clear that she is ugly and of no comparison visually to her lovely half-sister, she can kick some serious butt. She is not afraid to speak when she needs to and will do detective work AND dirty work to protect those she loves, yet does it with the poise and manners of a true lady. She's just awesome. Unfortunately Laura has no real depth, and her greatest achievement seems to be her beauty and gentleness (which really only hinders our characters). And though an honorable man, Hartright seems a bit wishy-washy for my tastes. He does do some excellent detective work though.

As for the woman in white? She is integral to the plot, in fact she is the reason it escalates as it does. Though not very deep, she is an interesting character that you will want to know more about.

I will say that I was surprised to find out that Collins was something of a feminist for his time, or at least he had more liberal ideas about women's rights than most of his contemporaries. I found parts of the narrative to be a bit sexist, as Marian and Hartright and others had certain things to say about the disposition of women. I highly recommend reading an edition with contextual information included; it really enhanced my reading and understanding of the text.

If you're looking for a good Victorian thriller and are willing to tackle a 600-page classic, look no further. Entertaining and educational (I learned a lot about the time and culture with my editions footnotes and introduction/appendices, which were excellent), it will keep you turning the pages and wanting to unearth all those evasive details.

Also, check out April's post on Good Books & Good Wine titled The Woman in White: A Drinking Game for the More Refined. Go ahead, you know you're curious.
Posted by Tahleen at 9:57:00 AM