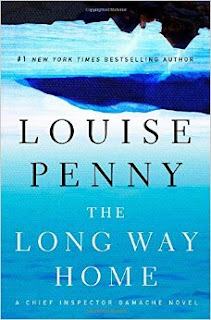 So, over the past year, I've been working on finishing the Three Pines series by Louise Penny. I mentioned this before. But I didn't mention why I was working through them--it was sort of a mission of mine. You see, my library's director was the person who got me started on the series, as she was a big fan. Then she read the tenth book, The Long Way Home, and told me she was completely turned off by the entire series because she was bothered so much by this book's ending. But she wouldn't tell me why, since it would reveal a major plot point, so of course I had to read all of them to figure it out. And I finally did.

Heads up, small spoilers for those of you who haven't read the series through book 9.

In this latest book, Clara asks Gamache for help in a personal matter. Her husband, Peter, and she separated and agreed to get together exactly one year later to discuss their marriage. The only problem is, Peter never showed up. Clara is worried, and after some hemming and hawing, asks for some help from the professionals. And so the search for Peter begins.

I won't reveal too much about this final book, as I don't want to give anything too big away, but I wanted to see what others who've read it thought. I wasn't as big a fan of it as the other books, as I felt actions for many characters were out of... well, character. Especially Gamache and Clara. Things just didn't feel the same as in the previous book, and though I read it quickly, I didn't really enjoy it as much as the others. I was annoyed that Gamache allowed Clara so much control of the entire search, and I am still annoyed by the ending. Not upset, just... annoyed. The whole thing felt like a cop out and too quickly wrapped up. (My director felt more strongly than I did; she really didn't like it.)

That said, I still do like the books, and I am anticipating the eleventh book this August. I'm very curious to see where Penny plans on going with everyone's stories, since the major plot lines have all been resolved. But it looks like poor Gamache will never get to enjoy his retirement, in any case.

Have you read this series? What did you think of the last book?