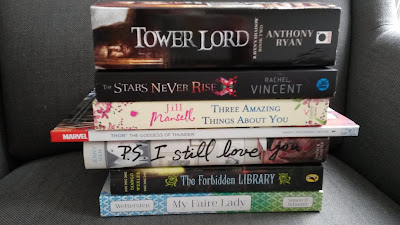 Bought:
-Tower Lord by Anthony Ryan: I bought the first book in the series recently and couldn't resist getting the sequel as well. Even though I haven't read the first one. Daisy fail.
-The Stars Never Rise by Rachel Vincent: I really like Rachel Vincent's writing, so obviously I'm excited for this new series!
-Three Amazing Things About You by Jill Mansell: it's my opinion that Jill Mansell is the queen of contemporary romance. She's awesome, so everything she writes is just an insta-buy for me.
-Thor Vol 1, Goddess of Thunder by Jason Aaron: YES FOR FEMALE THOR! I've been trying to dive more into graphic novels and this one just screamed my name.
-P.S. I Still Love You by Jenny Han: this series sounds super cute, so I couldn't resist getting the second one as a pretty hardcover even though I haven't read the first one yet..
-The Forbidden Library by Django Wexler: I've heard really good things about this author AND this book has a forbidden library in it. AND a talking cat. Obviously I need to read this.
-My Faire Lady by Laura Wettersten: I've been wanting to read this for ages, it sounds ADORABLE.

Egalleys for review:
-The Maddening Lord Montwood by Vivienne Lorret: I really like Vivienne Lorret's writing, and I need to read Lord Montwood's story because he is so interesting!
-Velvet Undercover by Teri Brown: this can be either REALLY awesome or not so much, but I hope it'll be Code Name Verity like awesome.
-After Alice by Gregory Maguire: I don't really like the original tale so much, but I love every adaptation I've watched or read, and Gregory Maguire is awesome.
-Signs Point To Yes by Sandy Hall: A Little Something Different was one of the cutest books I've read, so obviously I need to read this one as well!
-Dreamstrider by Lindsay Smith: the whole concept of dreamstriders is FASCINATING! I will read the crap out of this!
-The Rogue You Know by Shana Galen: Shana Galen writes amazing historical romances, I love her!
-A Curious Tale of the In-Between by Lauren DeStefano: I love a good ghost story and this sounds like a really good MG novel!
-Tonight the Streets Are Ours by Leila Sales: I LOVE Leila Sales' writing! I have all the excitement over this one!
-Until We Meet Again by Renee Collins: this sounds like my kind of epic lovestory, so I'm in! 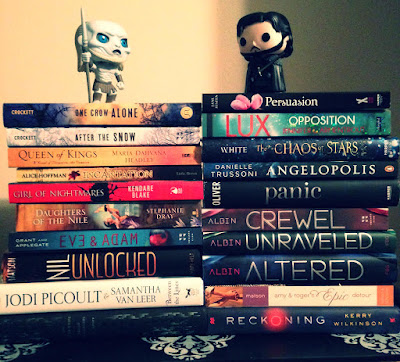 Bought
One Crow Alone by S.D. Crockett
After the Snow by S.D. Crockett
Queen of Kings by Maria Dahvana Headley
Incantation by Alice Hoffman
Girl of Nightmares by Kendare Blake
Daughters of the Nile by Stephanie Dray
Eve & Adam by Michael Grant
Between the Lines by Jodi Picoult
The Water Knife by Paolo Bacigalupi
Persuasion by Jane Austen
Lux Opposition by Jennifer L. Armentrout
The Chaos of Stars by Kiersten White
Angelopolis by Danielle Trussoni
Panic by Lauren Oliver
Crewel by Gennifer Albin
Unraveled by Gennifer Albin
Altered by Gennifer Albin
Amy & Roger's Epic Detour by Morgan Matson
Reckoning by Kerry Wilkinson

Won Nil Unlocked from Jana at That Artsy Reader Girl