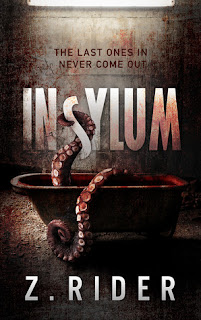 The Last Ones In... Never Come OutA.J. changed in boot camp, coming out all straight-backed and short-haired. His best friend Nate hardly recognizes him anymore, especially when it comes to the way he acts. His priorities. Now he’s about to ship out to Afghanistan, and despite the rift growing between them, the two decide to have one last hurrah—at Insylum, the extreme traveling funhouse they’ve been waiting for a chance at for years.They're last in line on the last night of the show. They are the last two to go in. And they may never come back out. Warning: Some tentacular activity. (Also body horror. And maggots.)


A.J. and Nate are out for their last hurrah before A.J. is deployed to Afghanistan. To celebrate, they go to a new scare funhouse that they've waited years to attend. The online reviews say they can do anything to you in there and that the last people in don't come back out. They are, of course, the last two people to go in. My immediate reaction..

They have to change their clothes and get into well worn hospital shirts, pants, and paper slippers. Then the fun begins. There are some crazy real looking asylum rooms with crazy real looking people in them. The guys are semi scared, but mask it by acting tough and laughing. They truly panic when they are soon separated and each suffer their own fates.
This novel is very fast-paced and takes place in one night. I read the first chapter and set it aside. Tonight, I picked it up and read the rest in one sitting. I was on the edge of my seat and I annoyed the hell out of the boyfriend during several scenes when I haphazardly tossed my glasses off.

This novel is NOT for anyone squeamish. And I don't mean there's a little violence and gore. I mean one part literally made me nervous and I dealt with some lingering anxiety after putting the novel down. Remember that I warned you.