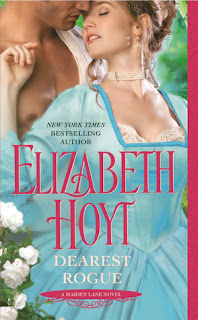 Title/Author: Dearest Rogue by Elizabeth Hoyt
Publisher/Year Published: May 2015 by Grand Central Publishing
How I got this book: This book was provided free for review by the publisher
Why I read this book: I seriously love this series. I must keep reading!
Rating: 4.5 stars


Lady Phoebe Batten is pretty, vivacious, and yearning for a social life befitting the sister of a powerful duke. But because she is almost completely blind, her overprotective brother insists that she have an armed bodyguard by her side at all times-the very irritating Captain Trevillion.

Captain James Trevillion is proud, brooding, and cursed with a leg injury from his service in the King's dragoons. Yet he can still shoot and ride like the devil, so watching over the distracting Lady Phoebe should be no problem at all-until she's targeted by kidnappers.

Caught in a deadly web of deceit, James must risk life and limb to save his charge from the lowest of cads-one who would force Lady Phoebe into a loveless marriage. But while they're confined to close quarters for her safekeeping, Phoebe begins to see the tender man beneath the soldier's hard exterior . . . and the possibility of a life-and love-she never imagined possible.


Review:
I’ve been reading the Maiden Lane series by Elizabeth Hoyt since we started this blog almost five years ago, so what better way to commemorate our almost five years than to review book eight in the same series that I started my reviews with, Dearest Rogue.

I have had my ups and downs with this series, especially some of the middle books where things seemed a bit repetitive. But this book is truly a historical I’ve never had the chance of reading, It’s something new and unique in a field of sameness, and I highly enjoyed it. Let’s back up and actually take a look at why.

Phoebe Batten is the youngest sister of one of the Dukes from the previous story and unfortunately she has slowly become completely blind. Captain James Trevillion was injured in the line of duty as a mounted horseman and now is employed by her brother to be her full time body guard, which comes in handy as someone is trying to kidnap her.  The story is a balance between Phoebe trying to grow into her own despite the hand she has been dealt, James coming to terms with his past, their blossoming friendship turning into something more, and this kidnapping plot.

Phoebe and her blindness and coming to terms with it really touched me. I thought it was handled well and like a caricature. The reactions of her family and loved ones and compared to James I thought were great. James treated her as a normal person and not someone to be pitied. It was so casual the way he would just say “Spoon at 3, bread at 9” and just continue on with the conversation. I loved her trying out her limits and figuring out how she can take the world as she must and just experience life.

James’ story is a little strange. Anti-climactic maybe? He gets on my nerves a bit with his “She is so young. I am so old” mantra. I feel like that trope is a little overplay, but even so I felt for him, especially in his “I can’t do everything I used to because I am wounded” scenes.

The kidnapping storyline luckily takes a backseat to a lot of the other plots, which is good because even though it’s not bad, it was the story I was least interested in. I've read the duke's sister is in danger store before. Nothing new there.

This book shines when James and Phoebe are interacting with each other. I just adore their alone time and not just the sexy times (which were wonderful too). They are just so perfect for each other, and the chemistry drips off the page.

This was one of my favorites in the series. Definitely top three. And the good news is, I would consider this a viable stand alone. There isn’t really too many spoilers for other books, nor is there any real backstory that would make it better having read the others first. So if reading a heartwarming historical about a blind woman coming into her own and into love sounds good to you, check this one out. I think it’s totally worth it.


This ARC was provided by the publisher through Netgalley in exchange for an honest review.