R holds forth on Animal Farm by George Orwell 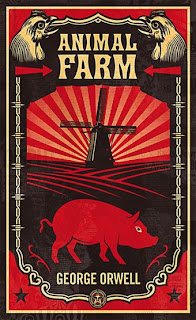 Animal Farm by George Orwell
New Windmills, 1972 (I totally can't find a picture of the right cover, by the way... The one on the left is just one I picked at random.)
How I got this book: It was lying about the house.
Why I read this book: I read this one some years ago, when I was 13... So, really I read it because it has animals in it and I liked animals.
Well, I think it would be fairly accurate to say that Animal Farm's reputation precedes it. On the surface, it is a fairytale (as Orwell originally subtitled it), a bit of fantasy about a farm full of animals who manage to drive the farmer away and take over the farm. Beyond that, it was actually written as a pretty direct critique of the Soviet Union as it was up to the end of World War 2, when the book was published.
As I remember it, from the very beginning of my knowledge of its existence, it has been indelibly associated in my mind with the Soviet Union - It had been represented to me as an allegory of Stalinism, and as I was vaguely aware of that as I read the book. I wasn't remotely mature enough or sufficiently in tune with world history to really understand what that meant, but I certainly was vaguely aware of it. I mean, the main reason I read it was because of the animals! What does a clueless kid care about politics or people who lived a long time ago in a country far, far away?
As it is, it was only when I later learned about the situation which inspired Orwell to write this allegory, when I finally began to gain a proper inkling about the historical context of the book, that I understood why it was considered so controversial a publication at the time.
It is interesting to note the various reasons that have been given - or can be deduced - for the banning of the novella.
I think that the heart of why this book has had such extreme reactions to it in the sixty-five years since its publication is that - assuming no prior knowledge of Orwell's anti-Stalin intent - it can be broadly interpreted as being about any political regime at all that makes great populist promises and ends up letting its supporters down... Hence the number of governments that have opposed it over the years, in states that may have nothing really to do with the USSR on face value.
Of course, such censorship theoretically does have a lovely way of backfiring. On the one hand the masses within these Animal Farm-deprived states may be prevented from exposure to anti-government ideas. But to the few who are somehow clued in to what they're missing, and certainly on the international level, such state-wide censorship by the Powers that Be is pretty much an admission of guilt... which would have exactly the opposite effect to what the state-controlled censorship boards might have hoped for.
Additionally, the Wikipedia article on banned books yielded an unexpected piece of information - Animal Farm has been banned in schools in The United Arab Emirates since 2002 because "it contained text or images that goes against Islamic and Arab values". I haven't any access to the original reference used in the article, so I'm assuming that this must be due to the anthropomorphic portrayal of pigs. From what I understand, it is also banned in private secular schools for non-Muslim expatriates; my general desire for the separation of religion and state means that this is disappointing news.
That said, it might be pertinent to note that the book isn't banned throughout the country but only in schools... I do wonder if its ban in schools is more a symbolic gesture than an actual restriction in this case, considering the book's availability through other channels. The school ban is particularly interesting because it suggests that age was a factor in determining whether the book constitutes appropriate reading material, even in the realm of religious censorship. Considering how my appreciation of the allegorical nature of Animal Farm has grown over the years, the age factor is certainly an interesting question to raise.
(Relatedly, there is an interesting review/article/essay thing about the impact of Animal Farm written by Christopher Hitchens, who does a much better job than I've done here... Although, as this other guy points out, the book actually is accessible in many Muslim countries, unlike what Hitchens mentions - so, pinch of salt, I guess?)
Posted by R at 3:15:00 PM