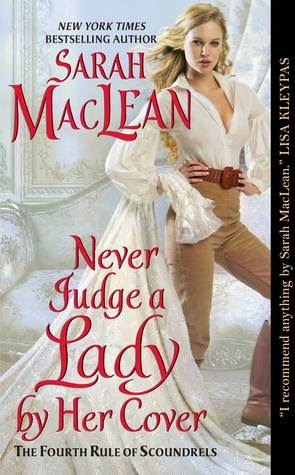 Title/Author: Never Judge a Lady By Her Cover by Sarah MacLean
Publisher/Year Published: November 2014 by AvonHow I got this book: LibraryWhy I read this book: It's the final book in a seriesRating: 3 stars

Spoilers from her on out for the first books in this series and the identity of Chase.

Summary:
She is the most powerful woman in Britain, A queen of the London Underworld ...But no one can ever know.He is the only man smart enough to uncover the truth, Putting all she has at risk . . .Including her heart.The fourth book in New York Times bestselling author Sarah MacLean’s incredible Rule of Scoundrels/Fallen Angels series. These four dark heroes will steal the hearts of their heroines and the readers alike! This is the last in the Rules of Scoundrels series—Chase’s storyBy day, she is Lady Georgiana, sister to a Duke, ruined before her first season in the worst kind of scandal. But the truth is far more shocking—in London’s darkest corners, she is Chase, the mysterious, unknown founder of the city’s most legendary gaming hell. For years, her double identity has gone undiscovered . . . until now.Brilliant, driven, handsome-as-sin Duncan West is intrigued by the beautiful, ruined woman who is somehow connected to a world of darkness and sin. He knows she is more than she seems and he vows to uncover all of Georgiana’s secrets, laying bare her past, threatening her present, and risking all she holds dear . . . including her heart.

Review:
I really like Sarah MacLean. I really do. I loved the first two books in this series, the third I loathed, and this one sort of fell between that. I liked the setup from the other books, but honestly it has been so long since I have read the other three that I felt like I missed some nuance. So if I take this book on it's own, it sort of falls flat. Chase is super impressive the other three books, actually living up to the machinations that she is claimed to wield. But this one, all I see is a women trying desperately to fit back into society, the same one which she has been trying to ruin for almost a decade.

The writing I noticed really quickly is pretty damn repetitive. If I had to hear one more freaking monologue about motivations I was going to flip to any other book in my nook. I pressed on despite all of this. The romance itself was fine. Nothing special though. The characters were again, just fine. Nothing really stood out to me in this.

The setup was outstanding, but unfortunately the execution fell a little flat for me. I am glad I read it to finish the series. I would recommend it only if you read the other books as I think it would be even less entertaining if I didn't have all the background.

Also? Avon, please. PLEASE stop with the pun covers. This one isn't as horrid as some of them, but urgh!

Note: I didn't super hate this, I read it on one airplane ride. I am sorry I can't get more verbose, but I have been sick all day :( Happy New Year everyone!
Posted by Julia at 11:25:00 PM