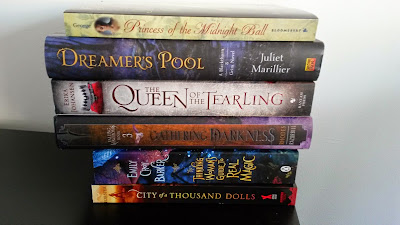 Bought:
-The Queen of the Tearling by Erika Johansen: I've already read this and really liked it, so I wanted my own copy.
-Gathering Darkness by Morgan Rhodes: which adds another series to the list of ones I have complete and have not started yet... But it sounds so good!
-The Thinking Woman's Guide to Real Magic by Emily Croy Barker: this was an impulse buy when I was shopping for Christmas presents, I don't really know much about it except that it sounds fun.
-City of a Thousand Dolls by Miriam Forster: I wasn't sure about this at first, but so many people have been raving about it that I want to check it out myself.

Gifted:
We had a Secret Santa gift exchange with our book club and my sweet friend Mel gave me:
-Princess of the Midnight Ball by Jessica Day George: I'm SO excited about this one! I've been meaning to read it forever!
-Dreamer's Pool by Juliet Marillier: this is the start of her new series and it's so pretty and I really need to read more by Juliet Marillier!

Along with the pretty books, Mel gave me this: 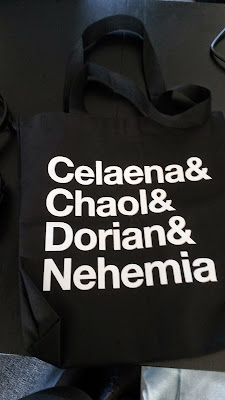 Which I'd been dying for ever since I first saw someone had one and just I LOVE IT OK?? I have awesome friends.

Egalleys for review:
-One of the Guys by Lisa Aldin: this sounds like a super cute contemporary and I hope to love this one very much!
-The Cage by Megan Shepherd: new series by Megan Shepherd about teens being held captive in a human zoo. Count me in!
-Stolen Magic by Gail Carson Levine: I really liked A Tale of Two Castles, so I'm excited for this sequel!
-Halfway Perfect by Julie Cross and Mark Perini: what could be more perfect for a girl who loves America's Next Top Model?
Posted by Daisy at 12:00:00 PM