Julia Reviews It Takes Two to Tangle by Theresa Romain 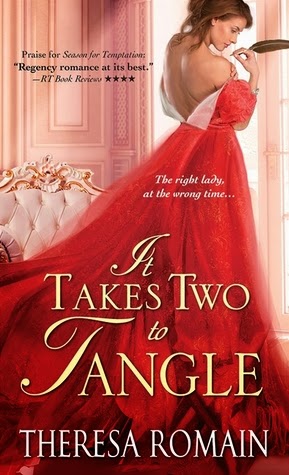 Title/Author: It Takes Two to Tangle by Theresa Romain
Publisher/Year Published: January 2013 by Sourcebooks CasablancaHow I got this book: Library ebookWhy I read this book: The third book in the series sounded interesting and I very, very rarely read books out of order. This is book one!Rating: 4.5 stars

After my lackluster start of romance reading this year, I decided to continue on with romance as a genre and pick a different book to read on my upcoming trip. I decided to try an author who I have read before and liked, but only had tried once, Theresa Romain. That is how I ended up with a long flight and It Takes Two to Tangle.

The summary for this book does not do a good job of explaining it, so let me take a swing. Henry Middlebrook is a man recently returned from fighting in the Napoleonic Wars, crashing at his older brothers house. He is having problems returning back to a society that has not changed whereas he has, mentally and physically. His sister-in-law decides that what he really needs is a wife and has the perfect woman for him. He agrees to meet her.

Enter Lady Caroline, widow and toast of the town. They would make a perfect match right? Well they would but she has a cousin, Frances her companion, who takes a liking to Henry. They hit it off and she decides to help him in his quest for her cousin's hand at his request. Well things sort of morph from there into a shared companionship, some misunderstandings having to do with some letters and a lot of them growing and changing as people deserving of one another.

This was SUCH a refreshing Regency read! So many times Regency romance falls into the same old patterns. Titled guy, innocent girl, maybe one or both is damaged but their lurve magically heals all wounds and they live happily ever after. There is no such short cut taken in this book. A lot of it focuses on how each of them are trying to work their way back into a semblance of life.

There is one misunderstanding sort of hidden thing, but it is not dragged out and I liked how it was handled. His war wound is a genuine thing he has to learn to live with and I thought was handled really, really well. My other downside (which may not be for some) is one of the sexy-times scenes fades into 1990s euphemisms that had me going, "Wait what just happened?"

It may have dragged a little bit toward the end when some crazy stuff goes down that I don't really think was needed but I still really enjoyed this novel. It's not your cookie cutter Regency. Frances has some hurdles of her own that she has to figure out, and so does Henry. They complement each other so well as a couple!

Overall I highly recommend this to someone who likes Regencys and the world of the ton but want's something a bit different. It's not too far off the beaten path, but enough that it's like reading a breath of fresh air (or some other metaphor that makes sense...)