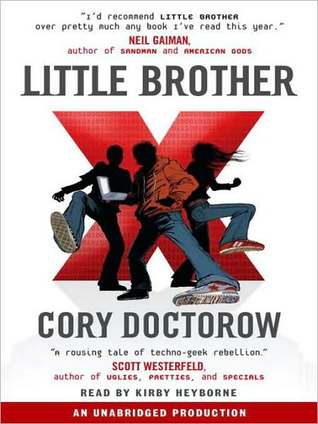 Marcus Yallow, aka W1N5TON, is pretty much a normal teen, albeit one who enjoys mass multiplayer online role playing games, LARPing, hacking, and all kinds of computer technology stuff. He also has no qualms about cutting school to further along the gaming competition he and a few of his friends are in the middle of. That is, until the worst terror attack on U.S. soil since 9/11 happens in their hometown of San Francisco. After being in the wrong place at the wrong time and getting picked up by Homeland Security, held for days in a prison while being questioned and humiliated, and finally getting released with the warning that if he talks they will come for him, he is forever changed. He and his friends, one of whom is still missing, must go on with their lives pretending like nothing happened. But Marcus has other ideas. Eventually, he wants to fight back and get some payback on Homeland Security for what they are still doing in his city, stripping what they once considered basic freedoms that they had taken for granted.

I would almost hesitate to call this book dystopian, since it's not really that; it's more like science fiction or speculative fiction, as this is something that possibly could happen in the future. And it is terrifying. I can very easily see this happening in our country, and it's very scary to think about.

What follows the attack mentioned above in the summary is a look at America sans freedom, America where all Internet use is closely monitored, where every move you make is put under a microscope. People are arrested for simply talking about things. It's very 1984. We are already part of the way there; I truly hope we never make it this far. It's a sobering thought, and this is a very important book for showing how we could get there.

I will say there is a lot of technical description, as well as other explanations of what things are and how they work, which might put off some people. As I listened to the audiobook while running, it didn't really bother me since I could zone out a bit while having the book go on. I was able to pay attention for most of it without getting bored though. And speaking of narration, Kirby Heyborne is great. As many of you already know.

Disclaimer: I got this audiobook out from the public library through OverDrive.
Posted by Tahleen at 3:32:00 PM