Julia Rants about Barbie and Technology

I don’t bring you a review. I had a book in mind but to do a View from Page Thirty from, but another crisis has been brought to my attention: Barbie. “Barbie? What does a child’s toy have to do with book site?” Well Barbie, in its ever growing empire, has spread to books. I am sure that there were Barbie books when I was a kid, but I never remember them being as bad as this.

The internet has been a flutter today and yesterday about I Can Be a Computer Engineer by Susan Marenco where Barbie is supposed to go through a fun story about Computer Engineering. In summary, Barbie is designing a game but doesn’t actually code it instead offloading that to the boys to do. She also breaks her and her sisters computer by infecting them with a virus that wipes design and Skipper's homework and music library. The boys fix that, too. Then in the end, in probably the cherry on top of this frosted cake wreck is Barbie taking all the credit in the end for fixing her sisters computer and for the coded game. The Amazon reviews are worth reading for this one.

It’s just so frustrating. So frustrating. I graduated college with a computer science degree. Do you know how many women were in my program and the computer engineering program put together? On average, three to five. At any point it was usually around three. This was in a computer department of about 100 I'd say.

This is a new phenomenon. Computing was women’swork in the 1950s. The first computer language was written by a woman, Ada Lovelace. But something happen in the mid-eighties that just killed women going into computing. 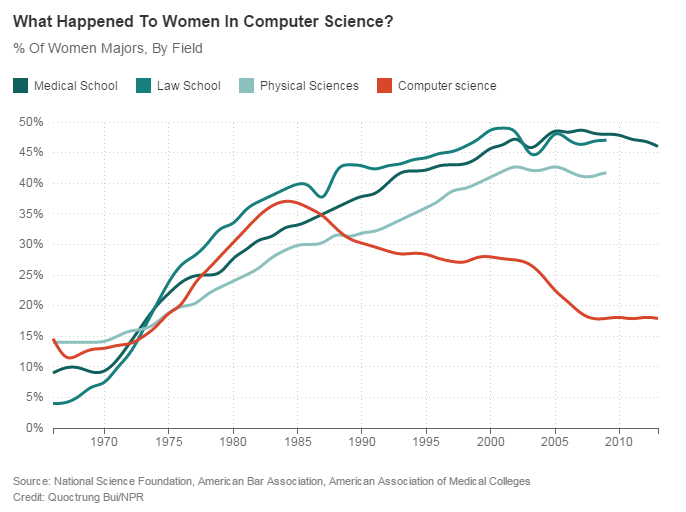 The NPR piece where this graphic comes from, When Women Stopped Coding, is a great listen on that phenomena, but in general it’s because of schlock like this book getting into the hands of little girls.

It’s subconscious the way society turns girls away from technology. I don’t think people are honestly thinking, “We really don’t want more women in computing.” That’s silly. But the online harassment from women who show their faces in a coding forum, or the fact that we have to prove that we know what we are doing… it’s so sad. The original blog post from Pamie.com had this quote that I thought summed up the thoughts around this well. For context, Steven and Brian are the two guys who Barbie turns to helping fix her computers:

The issue is not on a micro level, it’s on a macro level. It’s the fact that Barbie can’t just be a software developer, she designs but doesn’t code. It’s the fact that after six years of marvel movies, we have yet to have a female lead. It’s the fact that LEGO released its special “girl colored” line with “girl approved” activities. It’s the male dominated society. I am sure it is better in some aspects than it was in previous generations, but when it comes to women persuing careers and passions in technology, we are going backwards.

I want to conclude with a plea. If a little girl is interested in technology, foster it. Get her some Goldieblox to help with engineering skills. Check out books that feature women doing things for themselves. A great resource for this for books and other media is A Mighty Girl. Lists and lists of female empowerment focused lit and other products!

I stumbled into computer science because I enjoyed creating and maintaining a Geocities webpage when I was younger. I didn't know it was something that not many girls did until I got to my first programming class. I am not a coder today but still work in technology, and it is an uphill battle sometimes. So I guess I’ll end this with a cool resource that I know of that we used for our GEMS (Girls in Engineering Math and Science) summer camp for beginning programming. It’s a language called Alice and it’s free. It teaches basic programming skills while using cool graphics and not just boring code. You actually get to see the code in action.

Link me up with your own ideas for great literature or other media for young girls looking to foster their love for technology! It is close to Christmas… :)

Update: So the internet has been taking this book and fixing it to make it more something real computer engineer Barbie would say. Also apparently the writers of the original blog post are going to be on Good Morning America tomorrow so clearly this ruffled some feathers. The rewriting of the book is making me laugh at this sad situation. The twitter hashtag is #feministhackerbarbie

Make your own corrections to this book with this awesome website!
Posted by Julia at 5:00:00 AM