We now interrupt this week of holiday shenanigans with a review post! Time for some romance! 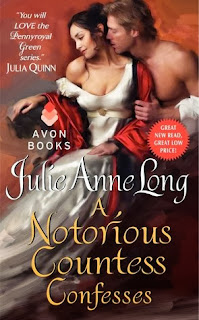 Title/Author: A Notorious Countess Confesses by Julie Anne LongPublisher/Year Published:  October 2012 by AvonHow I got this book: I own the eBookWhy I read this book: I am slowly working my way through this series.
Series: Pennyroyal Green Book 7Previous Reviews: I Kissed an Earl, What I Did for a Duke, How the Marquess Was Won
Rating: 3.5 stars

This one I just finished few days ago, or last night, I don't remember. Anyway, I had the same feeling with The Notorious Countess Confesses that I did with How the Marquess Was Won (review).

In this one we have our sexy preacher, Adam, and the new girl in town, the notorious countess and ex-courtesan, Eve. It took me way too long to realize they were called Adam and Eve. It was over half the book...

My first qualm with the book actually came in the beginning because wow were there a lot of info dumps in the first few chapters. I swear in the first three chapters, two things actually happen. Everything else is mused on when people are walking or sitting near a fire. Luckily once the plot showed up things evened out and were awesome.

The tension between these two is top notch, and I think they have some real concerns between the two of them that they would have to overcome for their happily ever after. So the middle part, the falling in love part, that's good. It's the freaking ending AGAIN that ruins it for me. Everything has to be neatly wrapped up in a nice little box with a bow on it. And of course it is all solved by stuff done off screen and too many coincidences or "We can just do this and everything works!"

Bah. That's why this is rated where it is. It's not bad. The majority is entertaining and fun in a heartbreaking way sometimes. But still, good romance. But the slow start and the rushed finished just left me with a sad face.

It's not the worst in the series, and it's not the best either. It didn't leave me wanting to shoot any characters so that's already a step up from Violet's book. I guess if they are consistently okay then that's better then me hating/loving them.

One more book and I am caught up! I thought this was the most recent. Ha. Of course not. But I may need a break before I read another.