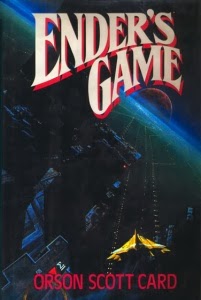 Title/Author: Ender's Game by Orson Scott Card
Publisher/Year Published: 1985 by Tor
How I got this book: I was given it in an RAK
Why I read this book: I wanted to before I saw the movie, because it was supposed to be amazing.
Rating: 5 stars

For years now I have had friends, mostly people who I would consider readers but not voracious readers, telling me that I need to read Ender’s Game. As soon as I heard the movie was in production I figured I should get on that. I received the book in an RAK by coincidence a year or so ago. But still with all of this, I didn't pick the book up until I literally had one week to read it before I was planning see the movie.

Here is what I knew about Ender’s Game before starting to read:


That is all I knew, which I think worked in my benefit because damn it count me among those whose panties are twisted. (Maybe I should get a better metaphor since it’s a kids book.. eh whatever).

Ender's Game is unlike any book that I have read recently. It pairs this scientific world with one that is grounded in enough reality to be familiar, but also enough differences to make it unique. Ender is six years old when this book starts off, but he isn't like any other six year old. He is abnormally smart. Well he was bred to be. You see there is a battle going on in the universe, or one is being held at bay really. There is an alien race, called buggers (because they look like bugs... sure), that moved into our solar system looking for a new place to colonize. Well we humans didn't take too kindly to that and fought them back. We won a huge battle and since then have been preparing the resistance. How? By finding the best and brightest kids to get pulled from their lives and trained to fight and command.

What an interesting read! Like based on point three above, I really thought I was going to enjoy it but not be overwhelmed by it because of my advanced old age of 26. No I really did enjoy it. The world building was excellent. Harrison Ford in my head as one of the space trainer people was amazing, but really pulled me out of the story when they called him fat. Lol wat?

I feel like there are many more reviews around the net that talk more in depth about why this book is good, why its bad and what Card’s personal influence means in the context of the pages, but I just want to focus on the fact that I haven't been this wowed by a book in a long time. Maybe not since The Hunger Games.

It was written well, flowed pretty okay… maybe a little slowly at times but nothing noticeable. It ended in a place that lets you continue a series but still wraps up the book (one of my biggest pet peeves with fantasy series), the characters are dimensional and relatable… I can’t find anything that I don’t like about this book, really.

Since writing this and posting over at my Booklikes page, I've seen the movie, too. Book of course was better, but not for the reasons that one would think. I thought the movie suffered from being too much like the book and not making enough translations into the visual medium. It didn't give the background that it lost by not being narrated by Ender. Or the movie did have the voice over, but that doesn't make you connect with a character like it does when you are reading it. Ender just came across as robotic. It was an okay movie, but I not one I would see again.

I am sad I took so long to read this, but glad that I finally did. If you haven’t yet and enjoy adventure stories with a moral and philosophical commentary on humanity in them, seriously give this one a read. Put aside Card’s asshatery for a second and read it. If you feel bad about giving him money, go to a second hand store or donate double what you paid to an LGBT group or something. It’s worth your time.
Posted by Julia at 1:00:00 AM