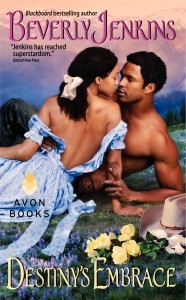 Title/Author: Destiny's Embrace by Beverly Jenkins
Publisher/Year Published: 2013 by Avon
How I got this book: I got this from the library
Why I read this book: It was the FIRST time I got a Smart Bitches, Trashy Books bookclub book and had time to read it before the book club AND wasn't busy during the live chat!
Rating: 2.5 stars

This was my first foray into Jenkins' work, and it wasn't too bad. I just didn't fall in love with the writing or the characters really (except Alanza, the hero's step-mama) and when you have a love story where the character's development drives the plot like it does here, and you don't enjoy the characters, it makes it a rough read. Let's SCORE it.The Story:It's the 1860s (ish), Mariah is a women pretty much working as a slave to her mom in a dress shop in PA. Something finally pushes her over the edge and she leaves for the safety of her aunt's house, and finally to the new life in California. She goes there, lying about being a widow (lol I almost wrote window), so she can get a job as a housemaid. Her job is with Logan, a rancher in California who lives with his (awesome) Spanish step-mom breaking in horses and making the women love him with his looks. From there the story moves to focus on their love and how it develops. Over three days.The story was okay. It wasn't my favorite because I like a little more conflict. It seemed like the characters overcame their obstacles with too much ease for it to be believable. I wanted more tension, more turmoil from Mariah over stepping outside the bounds of housekeeperhood or with Logan realizing that he may want to marry her, an institution he had actively avoided until that point. Since this is primarily character driven, let's look at them.The Characters:Mariah is the lead and she goes from meek mouse who lived under the thumb of her mom for 30 years to spitfire in the course of a cross-country train ride. I liked that she had spark, but the transition was hard for me to believe. No matter how much you want to change yourself when you have the opportunity, old ways still seep in. I have experience with this (I've not been trapped in a workhouse for 30 years though). Outside of that Mariah is a pretty strong woman. I loved she didn't get clingy to the hero. She was very much there to do her job and find her life. Logan was a little more well rounded from the beginning. His only flaw was that he breaks hearts and didn't want to settle with a woman. And that's all he had to grow from. His other character traits include, grumpy and stubborn (which was really fun to read when he and Mariah butted heads), friend to the natives and wanting Mariah. Not my favorite hero, but he was never a jackass. The secondary characters were pretty cool, Alanza (the MIL) leading the charge. She was a spitfire ranch lady. She was Logan's stepmom, and I loved that there wasn't that "She was my evil step-mom" storyline from either Alanza or Logan. That was refreshing.One thing I have to say that was probably my favorite part of this was that the cast of characters contained so much variety. Spanish, African-Americans, Native-Americans. Loved that. And I want to seek out more of these.The RomanceEh. I liked when they were fighting with each other. I love sparks flying. And I also loved, like I said, how Mariah didn't get clingy after the sexin'. But overall I was a little cold with the romance. It was just okay for me.The ExecutionThis is where it probably loses most of the stars for me. The writing just seemed so cliched at times. The euphemisms drove me up a wall. The whole story itself was rather hurried, in writing and time in the story. The thing took place over a week. I think I would have liked it more if they took their time with the romance. I know it's the west, but I don't know it just took me out of the story. The other thing I had previously mentioned was the seeming lack of consequences. Everything just flew by too perfectly.The OverviewI can see why people like it. Really, I can. It reminds me of this one series I read based around a family of eight kids in Texas. But it just didn't work for me. I liked the history laced within, and I liked some characters, but overall it just wasn't my cup of tea. It wasn't horrid, just meh. Hence the two and a half stars. If you want something light that has some interested sparks of history, that flys by fast and "treasures between her legs" don't bother you, check this out. I don't think I will continue this series, but I may try another one of the author's books. The multicultural aspect and finding a historical that isn't set in England are enough reasons to try again.