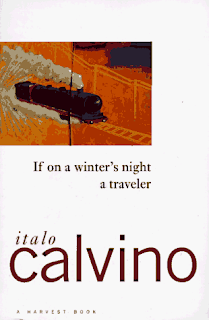 If on a winter's night a traveler by Italo Calvino
Harvest Books, 1982
How I got this book: The library
Why I read this book: I'd previously read The Life and Opinions of Tristram Shandy and adored it, so I thought I'd have a go at another well-known, well-regarded postmodern novel.
If on a winter's night a traveler follows the path of an unnamed reader - referred to throughout the narrative as "you"; that is, from a second person perspective - as he attempts to track down an unspoiled, complete copy of, um, If on a winter's night a traveler. What follows is a mind-boggling work of metafiction that meanders through the genres as the reader in question bumbles haplessly along on his way, blossoming as it does into a love story by way of a thriller of multi-layered complexity.
Interestingly, interspersed throughout the novel are various extracts from the random books that the unnamed readers stumbles upon on his search, our time with each separate extract limited by the protagonist's loss of the rest of the book, or indeed the book itself in its entirety. (This makes sense in the overall context of the novel, I swear.)
Frustratingly, these elements seemed to conspire against my complete enjoyment of the novel as a whole. While I certainly find the experimental nature of its structure fascinating and intellectually intriguing, I have to admit that I felt fairly alienated by the use of the second person narrative. Although I grant that my discomfort over this specific point may be down to my unfamiliarity with the second person perspective in fiction, it somehow felt odd to be told how I ought to be feeling at each point in the story - as though telling me how I ought to be feeling would instantly make it so. This alone made it especially difficult for me to identify with either the unnamed character that Calvino superimposed onto me, or any character at all within the main narrative arc of the novel.
Additionally, I was even less able to invest emotionally in any of the characters from the many disjointed extracts from imaginary books, as I soon got the picture that they would not appear in the overall novel again after the two dozen or so pages of their respective chapters had ended in their cruelly nail-biting cliffhangers.
Ultimately, If on a winter's night a traveler is like a delicately crafted work of conceptual art - I can't deny how brilliant the idea behind it is, and even now I am still filled with a sense of how very clever it all is. However, no matter how blown away by the concept I was, it cannot be denied that I found it impossible to be truly engrossed in the book itself, that I was unable to lose myself in its proceedings as I would have been able to in a more conventionally-styled novel or, as it were, in the finer details of a straight-forward canvas painting.
With that in mind, I give this book 3.5 stars, with points regretfully docked for its diminished entertainment value, and for reminding me of a "Choose Your Own Adventure" book without granting me the benefit of actually being able to choose my own adventure.
Posted by R at 12:00:00 AM