Jen Takes On "The DUFF"

Check out our Student of the Month post featuring Kody & get the dirt on what it's like to be a full time college student AND published author! 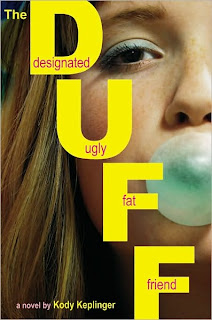 “It was hurtful, and it was one of those titles that just fed off of an inner fear every girl must have from time to time.  Slut, bitch, prude, tease, ditz.  They were all the same.  Every girl felt like one of these sexist labels described her at some point.  So, maybe, every girl felt like the Duff, too?” (page 256).

Duff = designated ugly fat friend.  Who hasn’t felt like a Duff at some point in their life?  I know I certainly have!  It still happens to me sometimes.  You’re out with some friends or sitting in class and you just feel like every other girl is prettier than you, more confident than you, and you’re thinking you should have used more concealer to cover up the giant pimple that magically appeared overnight.  Now I’m usually pretty secure with myself, but at some point we’ve all felt like the ugly duckling.
Seventeen-year old Bianca is out one night with two friends and she's approached by Wesley, the school womanizer.  He starts up a conversation with her because he considers her to be the Duff out of the three friends.  According to Wesley’s logic this guarantees him some major brownie points with Bianca’s friends (and he is hoping to hook up with at least one of them).   She gets so mad that she throws her drink in his face and storms out.
From this point on the word “duff” haunts Bianca.  Its pretty much all she can think about, the word just consumes her.  Bianca has been having issues at home.  Her mom is always traveling for work and is gone for months at a time, while her dad is like a ticking time bomb just waiting to explode.  To escape from all of this Bianca enters into an “enemies with benefits” relationship with Wesley.  She uses him as a way to forget her problems.
Even though Bianca irritated me at times I loved her.  I did want to yell at her when she first kissed Wesley though (why Bianca?  You hate him and he calls you names!).  But Wesley described her best when he said she is an  “intelligent, sassy, sarcastic, cynical, neurotic, loyal, compassionate girl" (page 175).  That sums up her perfectly, I don't even have to expand on it.
There is lots swearing in this book (Bianca drops f-bombs quite often) and sex is mentioned a lot.  If either make you a little uncomfortable I'd steer clear of this book.  Otherwise this is a great debut novel and is definitely worth a read.


I’ll leave you with one last quote (it’s a funny one):

“Wesley Rush may have had the body of a Greek god, but his soul was as black and empty as the inside of my closet” (page 6).