Kelly's Review of "Memoirs of a Geisha" by Arthur Golden

Title: Memoirs of a Geisha

Author: Arthur Golden
Published: Random House, 1997
Where I Got It: A yard sale 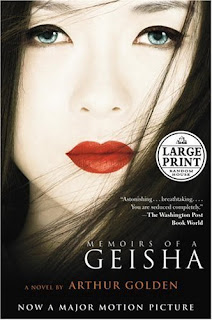 One word: WOW. I devour anything and everything historical fiction related, but had somehow not managed to delve into anything Asian related (maybe excepting The Joy Luck Club

). Not wanting to break my personal rule of ALWAYS reading the book before watching the movie, I gave this one a try.

Memoirs of a Geisha brings to life the exotic lives of geisha living in 1930s/40s Japan. Our geisha in particular was born as Chiyo, a poor girl in a small fishing village. She, along with her sister, is taken to the city of Kyoto at the age of nine, where she trains to become a glamorous geisha. Her new life of hard work, backstabbing and betrayal is a shock to her at first, yet she grows up to become very clever and successful.


What amazed me most about this book is the fact that Arthur Golden was able to write an American novel about Japanese culture from a female perspective so well and believable. I was doubtful at first whether or not he could voice a female effectively, but boy, did he ever. His imagery is unbelievably vivid.


However to me, the most fascinating part of this book was the culture. I learned so much about the customs, clothes, fashions, and practices of geisha (and also the fact that geishas is not a word, neither is kimonos. Who knew?). The time period it is set in was also interesting; early 1940s Japan was not a pleasant place to be. Another strong point is the wide range of characters. I found myself seething at Hatsumomo, sympathizing with Pumpkin, and rolling my eyes at Mother.


Towards the end, things got pretty so-so for me. I was much more interested in Chiyo's (later named Sayuri) struggles to become a geisha, not necessarily what happened after she became so successful. I will say that I'm glad a typical Hollywood perfect ending wasn't included. If everything had wrapped up just perfect, it wouldn't have had the same feel to it.