R holds forth on The Third Policeman by Flann O'Brien 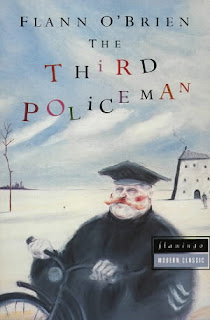 The Third Policeman by Flann O'Brien
Flamingo, 1993
How I got this book: The Library
Why I read this book: It was on the list of 1001 books to read before you die.
A man besotted with the work of the scholar de Selby becomes an accomplice in a murder, then is taken on a hellish trip through rural Ireland, a place where the policemen appear to be utterly obsessed with bicycles.

It is difficult to be too specific in any synopsis of the plot, for fear of giving the climax away - well, giving it away as much as it actually can be given away. Most of the events of the plot whirl past dizzyingly, almost incomprehensibly, in Alice-in-Wonderland style.
In fact, that's probably a good indicator of how far you'll get with this book. If you were charmed by the random parade of characters and set-pieces in the Alice books, there's a pretty good chance you'll be charmed by the same in The Third Policeman.
As it happens, I had no patience for Alice; no patience for wackiness for its own sake.
Likewise, in the case of this book - While I totally understand that there is a certain humour in having your characters on the floor hunting for an object much too small to be seen by the naked eye, understanding that it was intended to be amusing did not translate to me, the reader, finding it amusing in the slightest.
I may have slightly maligned The Third Policeman in comparing it to the Alice stories. In its favour, there is intended to be more depth to it than the mere representation of a child's flight of fantasy, a certain depth that has no doubt been integral to its association with the TV series Lost.
Actually, the section of the book I most enjoyed were really the little deviations that the unnamed narrator goes on, expounding upon the unhinged theories of de Selby - perhaps, terribly enough, because they gave the additional benefit of respite from all the "wackiness" of the main flow of the plot.
I'm afraid I'm going to have to give The Third Policeman only 2 stars, but with the caveat that some are definitely going to enjoy it more than I have.
Posted by R at 8:41:00 AM