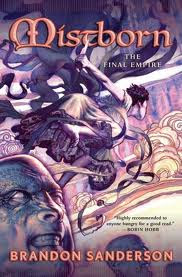 
Author: Brandon Sanderson
How I got my hands on it: My friend lent it to me (Thanks Taylor!)
Why I read it: I had already read Elantris and loved it, and had heard great things about the Mistborn series.
“Once, a hero arose to save the world. A young man with a mysterious heritage courageously challenged the darkness that strangled the land.
He failed.
For a thousand years since, the world has been a wasteland of ash and mist ruled by the immortal emperor known as the Lord Ruler. Every revolt has failed miserably.
Yet somehow, hope survives. Hope that dares to dream of ending the empire and even the Lord Ruler himself. A new kind of uprising is being planned, one built around the ultimate caper, one that depends on the cunning of a brilliant criminal mastermind and the determination of an unlikely heroine, a street urchin who must learn to mast Allomancy, the power of a Mistborn. “
So… what to say about this book?
It was fantastic! One of the best fantasy novels I’ve read. I read Elantris, and really enjoyed it. But Mistborn blew my mind. Brandon Sanderson has created such an incredible, magical and wholly believable world. And the characters that he creates… They are so human. Wonderful characters that are so realistic and believable. Vin is now my favorite heroine. (If only I’d read this when I did my Top Ten Heroines list!) She is such a strong character. My friend described it well. Vin adapts. She goes through a TON of changes in a very short time and adapts to every situation she is put in.
The storyline is strong and kept me enthralled from the first page until I turned the last page. I kinda knew where the storyline was going, but then there were twists thrown in that totally threw my predictions off. At one point I truly had no idea what was going to happen next (it was about this point that I was pulling the book out during my boring Health class and sneaking a few pages in while the professor wasn’t looking.) I like that Sanderson throws Religion and Politics into his novels without any hesitation. It adds depth to the story.
This is the first book in the trilogy, I plan on reading the next one very soon. (After I finish my 4 essays, ASL test, two class presentations, a bunch of assignments for my Business class and read a half dozen of Shakespeare’s Sonnets. Why must something like school get in the way when there are books to be read?) Anyway, AMAZING book.
5+ Stars!
Posted by Kimberly at 1:23:00 PM