Regarding Jana and "Dracula, My Love" 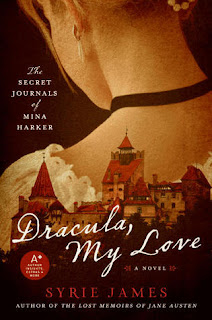 by Syrie James
Publishing Info: Harper Collins, 2010
How I got this book: I bought it from Border's during the teacher appreciation sale.
Why I read this book: I've always been so interested in the story of Dracula, but never actually read the book by Bram Stoker. When I saw that this story was told by Dracula's lover, Mina Harker, I was extremely excited to read this "untold story of the vampire romance that started it all."
Stars: 5
I love it when I read a book that makes me want to read another book. That's what books should do, in my opinion. Reading this book has convinced me that I need to read Bram Stoker's Dracula. Now that I know Mina's point of view, I need to read what the rest of the world thought. I seriously loved this book. I was kind of scared to purchase it, because it's a little out of my usual comfort zone. Plus, it was expensive. I kept thinking about it, though, so when I finally found a good deal, all other books on my to-read list were pushed to the back. I'm SO glad I gave this book a chance, because it is a truly beautiful story of love, deception, obsession, survival, and sacrifice. I was riveted, and could not put it down! Here's the summary of the book, taken from Syrie James's website.

Who is this young, magnetic, handsome, fascinating man? And how could one woman fall so completely under his spell?

Mina Harker is torn between two men. Struggling to hang on to the deep, pure love she's found within her marriage to her husband, Jonathan, she is inexorably drawn into a secret, passionate affair with a charismatic but dangerous lover. This haunted and haunting creature has awakened feelings and desires within her that she has never before known, which remake her as a woman.

Although everyone she knows fears Count Dracula and is pledged to destroy him, Mina sees a side to him that the others cannot: a tender, romantic side; a man who's taken full advantage of his gift of immortality to expand his mind and talents; a man who is deeply in love, and who may not be evil after all. Soon, they are connected in a way she never thought humanly possible.

Yet to surrender is surely madness, for to be with him could end her life. It may cost Mina all she holds dear, but to make her choice she must learn everything she can about the remarkable origins and unique, sensuous powers of this man, this exquisite monster, this ... Dracula!

I'm on Mina's side. I saw that tender, romantic side of Dracula and found myself falling for him right along with her! She's got a difficult situation at hand. She went from being the plain, simple girl who never got any romantic attention (even from her husband), to being obsessed over and stalked by a mysterious and sexy bad boy. You'd think that would be terrifying, but she was so captivated by him that she dreamt of and longed for him when most women would flee in fear. She fell deeply and hopelessly in love with him, yet she felt so incredibly guilty because of it. She was married to another man, whom she also loved, but was sneaking away in the middle of the night to be with Dracula. This mortified her, but she could not help herself. When she tried to refrain from going to him, he came to her in the form of a mist that materialized by her bed in the middle of the night, unbeknownst to her husband. He would them sweep her away and have her back by dawn. So scandalous! I think that's part of the reason I loved this book so much. I think a little part of everyone is curious about the forbidden. It's only human nature.
The characters were so well developed. Each person had their own voice and their own opinions. Dracula was strong, sexy, deceptive, evil, manipulative, and extremely romantic! He called her, "My Love." Oooo la la!  Mina was very strong, rebellious, and thought for herself during a time when women were supposed to be meek and submissive. She grew up a lot over the course of the book and learned a lot about herself. Mina's husband was the typical male from the time period. He was controlling, demanding, protective, and was all about saving Mina from this evil man who so desired her. Of course, he had no idea that Mina was a willing participant in her rendezvous with Dracula. She was sure to keep that a secret, in the hopes of preserving Dracula's life as well as her own.
While her husband and his accomplices (including Van Helsing, a former boyfriend, and the widower of her best friend) came up with an intricate plot to murder Dracula, she appeared to be helping them, but in reality was leading them on a wild goose chase formulated by Dracula himself. She kept swinging back and forth between the two, doing her best to keep everyone in the "loop". She hoped for both sides to win, because she cared so much about everyone involved. All of these elements tied together created a very spooky, suspenseful, and exciting romance. You get to jump into Mina's mind and hear her thoughts. You begin to understand her wants, fears, and desires. You number yourself lucky for not being in her shoes, but care too much to stop hoping that she figures everything out. You will be glued to every page and travel through every emotion with her.
The writing is done in old-fashioned English, which I found very refreshing. It really added to the story. I have a hard time when historical genres are written in contemporary language. This felt very authentic and seemed very real as a result. The mannerisms of each character were also believable. I loved the contrast between the chaste, ladylike behavior Mina displayed around her husband and friends and the, for lack of a better word, lustful thoughts and actions she exhibited with Dracula. It was like he had her under some spell that amplified her desires and emotions when she was with him. In all actuality, though, this book is not all about lust and carnal desires. Her time spent with him was always spent in long discussions about life and literature. They had so much in common. Her greatest desire was to be with him. The book is really very clean, except for one steamy "dream" she has about him.
I loved this book. It was entirely captivating, and I think I've discovered a new author to follow. Syrie James has written other books along the same lines, including The Secret Diaries of Charlotte Bronte

and The Lost Memoirs of Jane Austen

. Based on this book, I think they are both worth checking out. I'm also planning to read Dracula by Bram Stoker, and The Historian

by Elizabeth Kostova. I think Dracula might have cast a bit of a spell on me as well!
Happy reading!
Posted by Jana at 9:19:00 AM