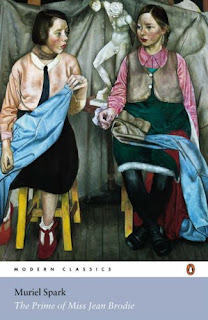 The Prime of Miss Jean Brodie

by Muriel Spark
Penguin, 2000
How I got this book: The library
Why I read this book: It's a school story and I like school stories.
The Prime of Miss Jean Brodie is about the titular teacher, an unwelcome iconoclast in a stuffy Edinburgh primary school, more interested in giving her young students a humanities-based general education than in sticking to the prescribed syllabus. From among her students a few favourites emerge, soon to be known as the Brodie Set, whom she takes into her confidence and attempts to mould into "the creme de la creme".
But in this case, her influence over her students does not culminate in the happy resolution that many school stories tend to end with. Because this is Dead Poets Society's inspirational message gone wrong.
The various synopses I'd read before deciding to pick the book up had led me to believe that it was another uplifting school story, dealing largely with the students' evolution under the tutelage of their eccentric teacher. As such, in spite of the short length of this novella, I had been expecting swaths of character development and lots of delightful little classroom scenes about how wonderful it is to be taught by an unconventional lady "in her prime".
However, the characterizations only scratch the surface. Each member of the Set is tagged with a label early on - "known for sex" or "for being a nobody whom everybody could blame", and so on - and throughout the rest of the story they conform to these labels steadfastly.

Understandably, that may well be perceived as a narrative flaw, but I reckon that it doesn't necessarily have to be. In fact, I'd argue that most of the characters are pretty much just peripheral - even several members of the Brodie Set - despite the synopsis on the back cover that suggests that the novella is primarily about teacher-student interaction. As the title suggests, and as I stated in the opening sentence of this review, this book is about Miss Jean Brodie - the prime years of her life, and her subsequent decline. It is, to a small extent, about her students as characters in their own rights; and to an extent it is also about Brodie's relationship with one student in particular, whose perspective is returned to the most in the narrative.

Above all, at the heart of the story, I think, is Miss Brodie herself, the tragedy of a blinkered, artistic temperament, and the loneliness of not finding a place of one's own in society even in middle and old age.
This story will be staying with me for a little while. I give it 4 stars.
Posted by R at 12:35:00 PM