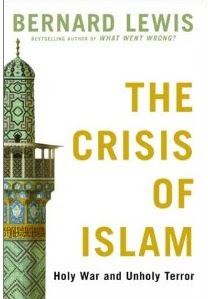 Image from Amazon
Title: The Crisis of Islam: Holy War and Unholy Terror

Author: Bernard Lewis (Web site)
Publisher: Random House, 2004
Notes: I checked this book out of the library.
A brief summary: "After the terrorist attacks of September 11, many Americans yearned to understand why Muslim extremists felt such passionate animosity toward the Western world, particularly the United States." (Quote from Goodreads.) This book aims to explore the historical bases for this animosity.
My thoughts:I read Bernard Lewis' The Crisis of Islam as part of a seasonal challenge at the College Students group on Goodreads. I have never embraced Lewis' approach to the Middle East—or more specifically, the Arab World—or Islam, thinking that he often takes a reductionist point-of-view that serves to reify Westerners' beliefs about Arabs and Muslims. I would not recommend this book to anyone who does not already know some basics about Islam or the Middle East. Lewis confirms American suspicions of the region and the religion instead of breaking down barriers to understanding.
Lewis starts out by stating that former President Bush was involved in a fight against terror, but not Arabs or Muslims, yet Osama bin Laden was in a fight against the United States. While this is true to an extent, it ignores the historical and political realities. Bin Laden utilized religious rhetoric to create an "us" versus "them" dynamic, but ultimately he is concerned with geopolitical issues like invasion and occupation, which one could read in his writings, Messages to the World.
Moreover, Lewis spends a good portion of his book relating Christianity and Islam before stating that there are, despite these similarities, profound differences. I start first by saying that Christianity is a faith-based religion (not practice-oriented, with the exception of Orthodoxy and Catholicism, to some extent). Islam is both orthodox and orthoprax, meaning that there's emphasis on both "right faith" and "right practice." Judaism tends more toward orthopraxy. Given the elements that Lewis focuses on—religious authorities' perspectives on justice and morality, apostasy, etc.—it would probably have made more sense to compare and contrast Judaism and Islam.
Lewis also spends an enormous amount of time talking about jihad. Jihad is a word that loosely means "struggle," and for religious Arabic speakers, it usually refers to a personal struggle (sinfulness, indulgence—the same sorts of things that plague "us normal Christians"). However, Lewis discounts this, saying that progressive Muslims like to say that jihad means a personal struggle, but that throughout Muslim history it refers to holy war. But what, you might ask, does he think about the Crusades? He argues that while jihad is embedded in early Muslim history, the Crusades are a departure from good Christian society and behavior. I am flummoxed by this conclusion. Additionally, Lewis discusses apostasy; he cites that the penalty for apostasy in Islam is death, which is harsher than any other religion. I cannot be sure that this is in the Qur'an or not, but my guess is that some Muslim leader or scholar once said this. However, these pronouncements need more evidence to be compelling, at least for me. I think that the uneducated reader or one looking to reaffirm his beliefs in the evil of Islam will take this at face value, which is quite unfortunate.
To be fair, Lewis is well-read in the area of Middle East and world history, and employs this knowledge in his argument. He even recognizes the importance of jizyah (a tax installed for recognized non-Muslim communities in Muhammad's time and in the early years of Islam) for the dhimmi (recognized non-Muslim communities).
Rating: 1 star
Posted by Jess // Curating Style at 9:36:00 AM