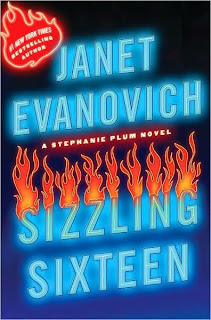 by Janet Evanovich
Publisher/Year Published: Diversified Publishing June 2010
How my grubby hands got a hold of this book: From the library!
Why I read this book: It's from one of my all time favorite authors!
Rating: 5 stars
Janet's Stephanie Plum series is about this girl named Stephanie, who's a Bounty Hunter. In case some of your don't know what a Bounty Hunter is, it's a person who goes around their area, searching and locating criminals who have failed to appear in court, otherwise known as an FTA. If and when these people are caught, they're taken to jail, and kept there until a new court date comes along. The Bounty Hunter gets a certain amount of money from capturing that particular FTA. And, that's exactly what Stephanie does!
Stephanie works for her cousin, Vinnie, who is an absolute creep! And Stephanie's two best friends Connie, and Lula also work at the same bonds office. Stephanie is assigned certain FTA's and her and Lula set out to go find these people.
This series is the best series I've ever read. It's the type of series that literally makes you laugh out loud. It's hilarious, scary, and makes you glad you aren't Stephanie Plum or have to deal with the things she does!
In this particular book, her cousin, and the owner of the Bonds office has been kidnapped by some bookies. He has a huge gambling problem, and he owes them $786,000. As the days go on, Connie gets updated phone calls from this bookie, saying that the price is going to keep rising, and by a certain date, if they don't have the money, Vinnie will be killed. So, Stephanie is off to hopefully find and capture Vinnie along with the random FTA's that she has to find.
Lula is probably the funniest character in this book, and all of the Stephanie Plum books. She's an crazy, loud, size 16 woman who tries to fit into size 4 pants, and small shirts. She's got dark caramel skin and wants to shoot everyone and every thing that gets in her way while they're searching for Vinnie, and whoever else they're looking for. Oh, and she's a former 'ho!
Stephanie, Lula and Connie have to come up with all of the money to free Vinnie, and they're not sure how they're going to do it. They end up having a huge sale at the Bond's office where the entire area shows up, but they still don't have all of the money. They need to find another way to come up with the money, and quick.
I probably should also mention Morelli and Ranger. These are two men in Stephanie's life who she can't decide who she wants to be with. Morelli is her on again-off again boyfriend of a few years, and in this book, they're mostly off again. He's also a plain clothes cop. And Ranger is a very dark, sexy and secretive security agent with his own bat cave.
This book is full of laughter, love, friendship, loyalty, and lots of dangerous, firing exploding, stink bombs and trip bombs that Stephanie has to go through in order to save her cousin Vinnie. Does she do it? Does she come out of the situation alive? This is a must read to find out! And that's why I gave it 5 stars!
Side Note: You do not have to read this series in order. All of her Stephanie Plum novels mention enough in the beginning of each book to understand what's going on. I didn't start reading them in order until her 10th book came out. She has 16 books in this series in total, along with a few random Stephanie Plum book that aren't apart of the series, but are still wonderful to read! And, as one more FYI, she has numbers in her titles, because those are the numbers of FTA's and/or bad guys, that Stephanie faces in each book! Nifty huh!?
Posted by Stuck Between The Pages at 4:59:00 PM