R holds forth on The Sparrow by Mary Doria Russell 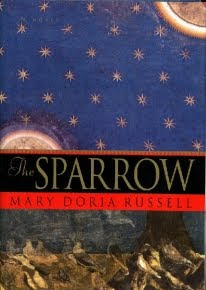 by Mary Doria Russell
Villard, 1996
How I got this book: The library!

Why I read this book: I'll go a bit more in depth about it later in this review, but it's pretty much down to this - Priests. In. Space. Awesome.

The monitoring of celestial radio waves pays off in The Sparrow when signals featuring extraterrestrial singing are picked up. Alien intelligent life is out there. While official diplomacy is stalled, the Jesuits organize a private mission of their own, as they have done for hundreds of years with far-flung civilizations back on Earth.

Years later, it is discovered that the sole survivor of the mission (and the main character of the book, for that matter) is Jesuit linguist Emilio Sandoz. He is eventually rescued from whatever Unnamed Nastiness it is that he’d endured, and finally returns to earth amid controversy. The bottom line – What was this Unnamed Nastiness, why the controversy, and what exactly happened out there?

Now, my experience with this book is pretty much a quintessential case of expectations having been set too high.

A number of factors contributed to my initial high expectations: The influential science fiction literary awards this book has won; the high rating on the Goodreads site (currently standing at an average of 4.17 out of 7,833 reviews – and I figured that 7,833 people seemed like a pretty reasonable sample size); the gorgeous cover (it made me want to leave it sitting around in conspicuous areas of my room to act as part of the décor); and most importantly…

Add all of that together and I was raring to get at this book. I won’t lie to you, as I checked it out from the library and held it in my hands, I was convinced that I was about to become acquainted with my new favourite novel.

Similarly, though, a number of factors contributed to my bitter disappointment:

The first thing that really, really struck me – certainly for the first half of the book, before the depressing and messed-up stuff really sets in – was that everybody spends the entire time exhibiting how supposedly funny they are and laughing their heads off at each other. Well, I wouldn’t have minded this in the least if the characters actually were funny. As it is, a lot of these droll little conversations probably suffer from the ubiquitous “You Had To Have Been There” syndrome... You know, when something might have been funny if you were privy to it as it is happening, but it turns out to be a lot less funny when retold secondhand, or on a piece of paper. That really frustrated me; possibly a little bit more than it should have, had I not been anticipating really awesome characters demonstrating their mastery of the art of conversation.

The second thing that struck me was the heavy use of character archetypes, because when her characters aren’t spending their time literally ROFLing, they’re busy fitting themselves neatly into character tropes. And I don’t mean science fiction tropes, mind! I mean ethnic stock characters, and priests either deeply repressed or affiliated to the mob. Considering that Russell is a biological anthropologist, it felt a bit like she was cramming in as many of the cultural anthropology stereotypes she’d picked up (in undergraduate Anthropology 101, presumably) as possible. Ooh, it's kind of harsh of me to say that. But it's kind of true.

And another thing, something kind of silly and petty but which never fails to unnerve me a little bit – There is a character somewhere in there who appears to be a slightly fictionalized version of the author. Kudos to Russell for not making herself the main character, but still. Still. These things tend to bother me because it makes me feel like I’m staring straight into the author’s psyche. Which is fine if the author has written an introspective, semi-philosophical piece of work, but generally not so much in other cases.

Anyway, thanks for bearing with my overwhelming negativity up to this point. I didn’t quite dislike the book that much actually; there certainly were aspects of it that I really enjoyed. As I mentioned earlier, I was really drawn to the book in the first place because of its basic idea: A Jesuit mission goes to space and meets aliens, and much religious angst ensues. The bits of the book that dealt with that directly I generally liked – the creation of an imaginary civilization with its own conventions, gender roles and rigid social order.

Another thing I liked was the conceit of alternating the chapters between scenes about the expedition itself and scenes of Sandoz’s recovery after his return. The way she juxtaposed Sandoz’s pre- and post-expedition personalities was, well, just brilliant. Seriously, Russell’s powers of foreshadowing are breath-taking and awesome and added a whole lot to the overall motion of the plot. Well, it added a whole lot to my personal appreciation of The Sparrow, anyway.

Overall, however, while I enjoyed the basic story line and the themes involved, I felt like they could have been presented better. And by “better” I mostly mean “with less scenes featuring the characters falling about laughing about things that aren’t really that funny”. (Sorry for bringing it up so much, but that in particular really irked me!) I’m giving The Sparrow 2.5 stars – I’m not failing it because I still felt pretty involved with the story. In fact I think I might even read the sequel, Children of God, though I’m not so sure whether it’s the sadist or the optimist in me that compels me to do so.
Posted by R at 9:37:00 AM