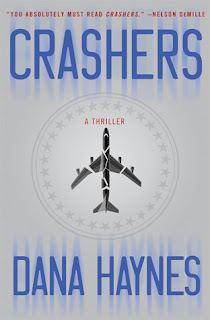 Author: Dana Haynes
Publisher: Minotaur, 2010
Notes: I received this book as an ARC from the Goodreads First Reads program.

A brief summary: "Whenever a plane goes down in the U.S., a 'Go Team' made up of experts is assembled by the National Transportation Safety Board (NTSB) to investigate. Those people—each of them a leading expert in a specific area—are known informally as 'Crashers.' When a passenger plane, a Vermeer One Eleven, slams into the ground outside Portland, Oregon, 'The Crashers' quickly assemble to investigate the cause." (from Goodreads)

My thoughts: If you like TV shows like NCIS:LA or fast-paced action movies, you'll be hard-pressed not to like this book. The plot is interesting—what happens during a major plane crash, and how does the NTSB investigate the cause of a crash?—and the shifting perspectives between the bad guys, the good guys, and the questionable guys keeps the book moving forward. Add in the layer of a possible second attack, and you have a great plot.

My one critique about this book actually causes me to give it 3.5 stars is the characterization. Haynes tries to deliver a cast of characters who are diverse and capable, while also providing suitable background. However, when it's actually written out, I felt as though the characters were overdone and the writing clunky. Had the characters been better established by focusing on one, primary character—sticking to writing the 'good guys' section just from Tommy's perspective, perhaps—the writing would have been tighter. Instead, the narration is somewhat omnipresent and omniscient, but poorly done. Like I said, if you like NCIS:LA, you'll probably like this book, because some of the characters are similar. (NB: I like NCIS:LA, but didn't love this book.)

All of that being said, I think the plot is worth reading, and it sounds like Haynes did a healthy amount of background research while writing this book. Just try not to get as distracted by the characters as I did!