Julia Reviews The Scoundrel and the Debutante by Julia London 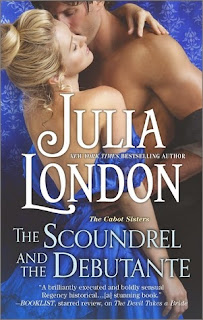 Title/Author: The Scoundrel and the Debutant by Julia London
Publisher/Year Published: May 2015 by Harlequin Books
How I got this book: I was provided an ARC in exchange for an honest review
Why I read this book: I enjoyed the last book in this series, so of course I am going to read the third
Rating: 3.5 stars

The dust of the Cabot sisters' shocking plans to rescue their family from certain ruin may have settled, but Prudence Cabot is left standing in the rubble of scandal. Now regarded as an unsuitable bride, she's tainted among the ton. Yet this unwilling wallflower is ripe for her own adventure. And when an irresistibly sexy American stranger on a desperate mission enlists her help, she simply can't deny the temptation.

The fate of Roan Matheson's family depends on how quickly he can find his runaway sister and persuade her to return to her betrothed. Scouring the rustic English countryside with the sensually wicked Prudence at his side—and in his bed—he's out of his element. But once Roan has a taste of the sizzling passion that can lead to forever, he must choose between his heart's obligations and its forbidden desires.

I read a lot of family trilogies or series books in the historical romance genre, and I have to say that Julia London's Cabot Series is a new book every time. Well, you may be asking, of course it is! What a silly thing to say? But I have seen too many times where you pretty much just get the same story again with a slight deviation to make it seem unique. This is not the case here.

Prudence is tired of her sister's scandalous behavior ruining her chances at a happy life. After being unmarried into her twenties, she is not quite sure what to do with herself and falls into a morose outlook of the world. Her sisters decide that just what she needs to be cheered up is to go see her friend who just had a baby. I see a flaw in their logic.

Out of sheer desperation just for a break, she agrees but while waiting for her family friend to pick her up in their carriage for the ride north she meets a stunningly gorgeous and cutely befuddled American gentleman, Roan. Throwing caution to the wind, she decides to purchase a ticket on the public coach to spend more time with this handsome foreigner until her stop where she can rejoin her party. Hi-jinks ensue.

Let me just say there is a lack of ball rooms and ton parties in this book that makes it a nice refresher. It's sort of far-fetched in its realism, but it was enough of an adventure that I was along for the ride. Roan and Prudence are quite interesting leads. They have a good chemistry between them but still hold their own as characters. Prudence, for what I know of her from the last books, seems to sort of morphed into her sisters along the way, but the fact that she is aware of it make it okay.

The story has a pretty fast pace until about the last third where it sort of grinds to a halt. It's still engaging but not as much as the first two thirds. So it was sort of the same problem I had with the last book. I will say that I did read it in one plane ride, so it was definitely something I didn't want to stop reading.

If you enjoy previous Julia London novels, or Regency Romance with a twist and a fun adventure, this is a good pick. I don't think it is necessary to read the other two in the series before this one. There are minor spoilers but nothing too big.

It's not my favorite, but not horrible either. So a solid middle of the road read that put a smile on my face.

Thanks to Harlequin for providing me the ARC for this review.