Julia Reviews The Devil Takes a Bride by Julia London 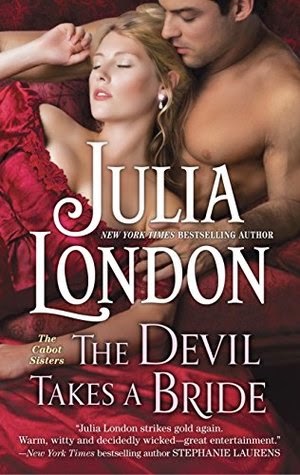 Title/Author: The Devil Takes a Bride by Julia London
Publisher/Year Published: January 2013 by Harlequin Books
How I got this book: I was provided an ARC in exchange for an honest review
Why I read this book: I rarely get historical romances from Harlequin in the mail, so I figured I would try this one! Plus I've been meaning to try Julia London
Rating: 3.5 stars


I don’t like reading books out of order when they are in a series. I don’t like watching TV out of order when it is a series either for that matter. Call it a character flaw. So when I saw The Devil Takes a Bride show up at my doorstep I thought, “I must read The Trouble with Honor so I can read this one and review it!” Well that didn’t go so well.

Now I was trepidatious. Would I even be able to finish it? I decided that I liked Grace enough from the bits I saw her in the first book to give this a try. And I am glad I did because I ended up liking it in the end.

The Devil Takes a Bride starts off with Grace trying to trap a husband to save her family from the streets. It’s not an ideal action,and she is reminding me a lot of her sister right away which worried me. But once the trap had sprung and she caught the wrong man, things got better. Well, not for her, but for my reading experience. It went a different direction from the first book and focused on the couple just trying to make the best of bad situation.

Grace is far from perfect and is trying to grow up while accepting her fate. Jeffery, the lead, is a recluse by choice and has some nontraditional habits… sexually and mentally. The book is really about figuring out how the two of them can figure out each other without making the other’s life miserable. Jeffery needs to see how he can integrate people into his well ordered world while also understanding that he can open up. Grace needs to see how life isn't all fun and games and that real life is something that is hard and that you work hard for.

I just love how the two of them play off each other. Both failing to understand anything about the other off the bat. They had to grow into each other. That is one of my favorite romance tropes - the married in haste and now we have to make the best of this trope. I was a bit worried though that Jeffery's ails would be healed by the Power of Lurve, but luckily that isn't the case. Instead we just get a non-traditional duke.

In the third act though, more of the secondary characters make appearances which started to drag on for me. The main story had a teeny bit going on at the end, but in my mind they had already solved the main conflict. It was more about figuring out secondary story lines and almost unnecessary. It didn't hold my attention as much as when the story was focused on the two of them.

Overall the book was a nice read for me - a great couple with a sizzling romance. The secondary characters were okay, but they made the ending drag a bit. Despite that I am glad I read it and enjoyed it.


PS. Apparently the book was originally called The Fall of Lady Grace which in my opinion is a vastly superior title. I want to call it that from now on instead of yet another rouge/devil/scoundrel + bride combo.

Thanks to Harlequin for providing me with the ARC for this review!
Posted by Julia at 12:44:00 AM