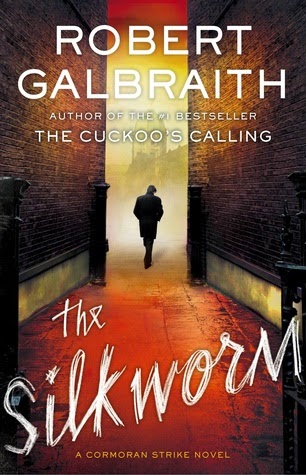 Title/Author: The Silkworm by Robert Galbraith
Publisher/Year Published:  June 2014 by Mulholland
How I got this book: My coworker let me borrow it
Why I read this book: I reviewed the first book and really enjoyed it
Rating: 4.5 stars

When novelist Owen Quine goes missing, his wife calls in private detective Cormoran Strike. At first, Mrs. Quine just thinks her husband has gone off by himself for a few days—as he has done before—and she wants Strike to find him and bring him home.

But as Strike investigates, it becomes clear that there is more to Quine's disappearance than his wife realizes. The novelist has just completed a manuscript featuring poisonous pen-portraits of almost everyone he knows. If the novel were to be published, it would ruin lives—meaning that there are a lot of people who might want him silenced.

When Quine is found brutally murdered under bizarre circumstances, it becomes a race against time to understand the motivation of a ruthless killer, a killer unlike any Strike has encountered before...


Well the second book did not disappoint, that's for sure! I don't read a lot of mystery or crime but I really enjoy this series. I only mention that I dont read a lot of it because I have heard that this series doesnt hold up for people who are like diehard crime fans. But I enjoy it.

The funny thing about this series is Galbraith manages to give me all the clues to figure out who did it and then manages to convince me that I am wrong and it cannot be that person at all! I bounce back and forth between people more than a pinball.

As much praise as I have for this book and the series, I have to say that some of the characterization is a little flat on people who are not Strike (the lead). Strike is a great hero. I love how his mind works and following him as he figures it all out for himself. But Robin, the second lead, has only a minuscule amount of development. Hopefully the next book (which I am assuming with happen) gives us more development for her than relationship problems.

The other thing that is sort of problematic is the repetition of some of the facts to the point where it is like, "I get it. He has no leg" or something. It had me skimming a bit.

But I honestly enjoy the hell out of this series. I get sucked in so quickly and just enjoy the ride the book takes me on.

It's nice to know that Rowling is still having a big impact on the books that I enjoy.

Cross-posted somewhat to my Booklikes blog. And for those of you who do not know, Robert Galbraith is another pseudonym for JK Rowling.
Posted by Julia at 2:00:00 AM