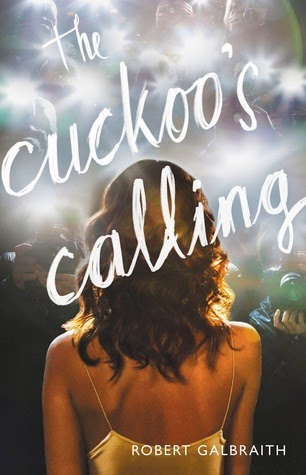 Title/Author: The Cuckoo's Calling by Robert Galbraith
Publisher/Year Published:  2013 by Hatchette
How I got this book: My coworker let me borrow it
Why I read this book: This was our June/July bookclub pick at work
Rating: 5 stars


After losing his leg to a land mine in Afghanistan, Cormoran Strike is barely scraping by as a private investigator. Strike is down to one client, and creditors are calling. He has also just broken up with his longtime girlfriend and is living in his office.Then John Bristow walks through his door with an amazing story: His sister, the legendary supermodel Lula Landry, known to her friends as the Cuckoo, famously fell to her death a few months earlier. The police ruled it a suicide, but John refuses to believe that. The case plunges Strike into the world of multimillionaire beauties, rock-star boyfriends, and desperate designers, and it introduces him to every variety of pleasure, enticement, seduction, and delusion known to man.
You may think you know detectives, but you've never met one quite like Strike. You may think you know about the wealthy and famous, but you've never seen them under an investigation like this.
Introducing Cormoran Strike, this is the acclaimed first crime novel by J.K. Rowling, writing under the pseudonym Robert Galbraith.

During my reading slump book club at work selected The Cuckoo's Calling for our June pick. Luckily for me, our June meeting got pushed back into July giving me the chance to try and read it. Right after I posted my last post, my friend gave me this book and said she liked it. I really like the discussion at the meetings, so I gave it a try. And I am glad I did.

I don't read a lot of crime or mystery novels so this was a great one to expand my horizons with. First off, it's JK Rowling so I at least knew I liked some of her past writings, so I was hoping for it to suck me in, and it did. We start off with the scene of the crime in the prologue. Instantly you are thrown into the world of this supermodel and how tragically it ended.

Then we get to meet Strike, our detective. He and Robin, his temp secretary, are hired by the murdered model's brother to investigate the suicide, because he doesn't believe that it was a suicide. He thinks it was murder. We get to follow Strike as he tried to unravel the events of months ago and figure out all the clues. I was completely wrong at who it was as per my usual mystery read, but I really enjoyed how the story unfolded.

I am hoping that this read, which I like and was instantly involved in, snaps my slump. I am recommending this for anyone who likes a good bit of mystery in their life. It's a large book, but a quick read.