Paula Reviews This is How You Die 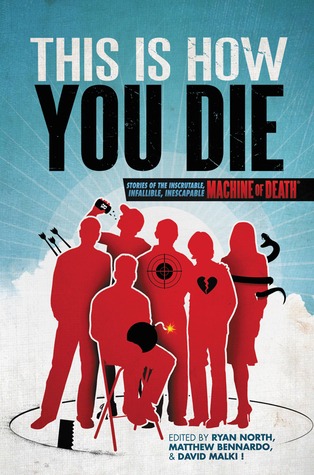 Title: This is How You Die: Stories of the Inscrutable, Infallible, Inescapable Machine of Death

Editors: Ryan North, Matthew Bennardo and David Malki !
Publisher: Grand Central Publishing, 2013
How I got my hands on it: Bought it at Barnes and Noble

So a few years ago the creator of Dinosaur Comics (www.qwantz.com) published a little book called The Machine of Death. (My original review can be found: here) It was a project born out of one thing one of his characters said that fans latched onto. Fans started sending Ryan North stories based on a "machine of death" that would tell you how you would die- and no matter what- that prediction came true. If your prediction said "Old Age" you could die of old age or you could be hit by a car with an elderly driver. His little self published book reached #1 on Amazon and made it into real brick and mortar book stores. And people loved it so much there was a demand for more stories. And a board game!

MoD is one of the few books in the past few years that has really messed with how I view the world and was a total mindf**k. I was so excited to see that there was a second volume of it. The setup of the book is still the same: short stories and amazing art. And yet This is How You Die expands the idea of the Machine is some really interesting ways. In this volume- the machine isn't just a black box that takes a blood sample and gives you a sheet of paper- it can change its predictions, it can sing haunting songs, it can be used by humans to try and prevent epidemics, and my favorite: it can be an alien species that has been slowly infiltrating earth...

I think my favorite thing about this volume of stories is that where in volume one it was "here's a prediction and here's a funny/sad/poignant story about how it comes true" volume two's stories are more like "here's a prediction and here is how the person deals with it/doesn't deal with it/ tries to run from it/ comes to terms with it" somehow it has managed to mess with my head even more than the original. It's made me wonder that if I were presented with the Machine - would I want to know how I died? Would I try to run away from my prediction?

Also the art in the volume is just plain gorgeous. So there's that. All in all: 4.5 stars. It didn't quite get the full 5 because some of the stories left me feeling fatigued. They were all good- but some were a lot to take in and process. And that means I couldn't read the book as fast as I wanted to!