View from Page Thirty: The Knife of Never Letting Go by Patrick Ness 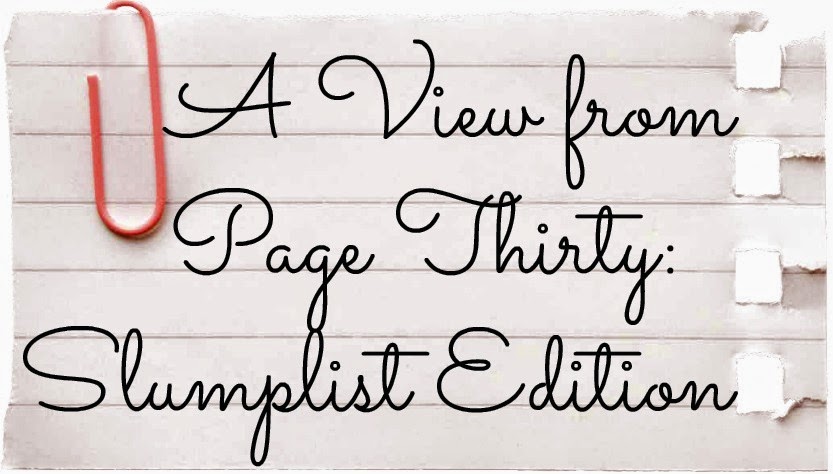 It's been a while since I've done A View from Page Thirty, so I thought I would bring it back. And what better way to bring it back then with a new graphic and using the list of suggestions that you guys gave me during my reading slump post.

For those of you not familiar with this, A View from Page Thirty is a feature where I read thirty or so pages into a book and give you guys my first impression. Some books are great out of the gate, some take a little bit of warming up to. Some are just books that you know right away are going to be tough to read.

My general rule with books is that if I am not interested at all by around page thirty, I don't have to go on. There are too many books in this world for me to waste my time on something that I don't enjoy. But every book I start (barring some rare cases) get's thirty pages.

Hence was born A View from Page Thirty.


Today's book as I mentioned comes off of the reading slump post. I compiled all of the suggestions into a list of 65 books, which I am lovingly calling the slumplist, and I plan to look at them all. Of those 65 books I've already read 4, so only 61 more to go. I decided to start with Patrick Ness' The Knife of Never Letting Go. Four people, Hayley, Susan, Kritika, and Rockyriverteenlibrarian recommended it saying:

"It's the first in the Chaos Walking series, and it's really amazing. I've been recommending it to everyone since I read it in January." - Hayley

"The narration in the Ness series is a little hard to get used to at first, but don't let that dissuade you -- it's a great, unique YA series." - Susan

"I love both of those series! I'd recommend the audio for both of them as well - the narrators are excellent." - Kritika

I am going to go into detail on what happens in the first thirty pages. While it is nothing that isn't in the summary, if you consider that spoiler territory, jump down to my Final Verdict.

Prentisstown isn't like other towns. Everyone can hear everyone else's thoughts in an overwhelming, never-ending stream of Noise. Just a month away from the birthday that will make him a man, Todd and his dog, Manchee -- whose thoughts Todd can hear too, whether he wants to or not -- stumble upon an area of complete silence. They find that in a town where privacy is impossible, something terrible has been hidden -- a secret so awful that Todd and Manchee must run for their lives.But how do you escape when your pursuers can hear your every thought?

The View From Page Thirty:
The book starts off with a first line that is quite intriguing, "The first thing you find out when yer dog learns to talk is that dogs don't got nothing much to say." From that I have learned that this is some sort of alternate Earth where dogs can talk I guess, and that this is going to be a book with annoying first person misspelled like the person thinks narration. Surprisingly both the first person and the 'yers' and 'thrus' stopped annoying me almost immediately because the story starts off right away.

Our narrator is Todd, the youngest boy in a city of men on the verge of becoming a man himself (he's 13 turning 14 in our years. Years in this world at 13 months so he keeps mentioning his 13th birthday, but I stopped and did the math). Todd explains through these 31 pages (first three chapters) that this is a new world of some kind where women and men went to colonize for maybe religious freedom (?). But once they arrived they got into a war with some sort of native people they call the Spackle who release some sort of chemical weapon that killed all the women. Todd was the last baby to be born before the women died.

That right there would be interesting enough right? But remember that talking dog? Apparently when that happened it also warped reality into making every human and animal telekinetic. So Todd can think to his dog Manchee and Manchee can think back. They call this noise because there isn't really much control over it. Holy hell, is that a scary thought. I couldn't imagine being around people who can always hear my thoughts. No secrets, no privacy. But I guess it would be cool to talk to dogs and things...

Anyway, the story kicks off in the first chapter with Todd coming across silence. Something is there and it has no noise. He high-tales it back to town where since there are no secrets his adoptive fathers immediately know what's up. The last line I read in the selection was,

What I am Loving:
I am really liking the pace of this. It is clipping right along and getting me into the action. At the same time, it is slowly revealing the rules of this world and not just telling me how it works. It's all show. I love that. I'm interested to find out more about their enemies and why all the women died off. And obviously what this silence is and why it is chasing him...

What I am Unsure Of:
I was unsure of the narration, with the colloquial speech patterns in the writing, but that grew on me quickly. I guess I am still unsure of my narrator Todd. Will I be able to connect with the 13 year old boy who is coming of age? I had a hard time of doing that when I read The Outsiders in my twenties (I loved it when I read it at 13 though). This isn't going to deter me from reading on though. I am very interested in this story.

Final Verdict:
Yeah I am totally reading on. I am really curious to see how the story unfolds and what the rules and limitations of this world are. It sounds like a different twist on the dystopian thing, rather than just the controlling government makes us do something strange that our main character is rebelling against. I want to know more and can't wait to continue on!