Paula Reviews We by Yevgeny Zamyatin 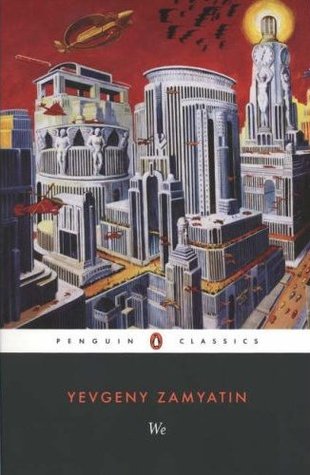 We by Yevgeny Zamyatin
Published in 1921
Rating: 4 stars
How I got it: Found a copy at a local book store!

So this summer I made a mini goal of tackling books that have been on my shelf/list for more than a year. Whether they are super long (The Historian) or not quite genre's I'm interested in anymore (White Oleander) or in this case- hard to find and kind of intimidating.

I have been intimidated by We for awhile because it is the foundation block of my favorite genre: dystopian literature. And I'm not talking about contemporary dystopian stories like The Hunger Games (which don't get me wrong - I love a lot) but he was threatened by communist Russia for writing this kind of literature. People claimed that this book predicted Stalinism. It has been claimed that this book inspired 1984 and Brave New World. I've been putting this book off for awhile. What if I didn't understand it? What if I didn't like it?

The premise:
After a Two Hundred Year War society, One State, has been rebuilt under the guidance of the Great Benefactor. Humans are no longer people they are numbers. The main character, D-503, is the main builder of the spaceship Integral to bring the order of One State to other planets. Every minute of a person's life is planned out by the Table of Hours.

D-503 is happy and blissful with his life until he meets I-330. She doesn't play the rules. At home she doesn't wear her uniform and drinks alcohol (which has been banned). He would hate her and report her if he didn't find her so interesting. As D-503 gets to know I-330 more he begins to develop.... an imagination....

Thoughts:
I really enjoyed this book. It wasn't perfect- there were a lot of things that I wish had more details or development. Sometimes the writing was choppy and hard to follow (although- that could be the translation and not the original). There were a few times where I had to pause and go "wait what just happened?"

But besides those things- This book was a great read. It had some terrifying ideas, like imagination being treated as a sickness or any crime (even not reporting for work without a sick note) being punished with public execution...
I found it really exciting to know the history of the book and see how this truly was a scary predictor of Stalinist Russia (the history geek in me was quite happy). I also could see how some of my favorite books were inspired by this book.

If you are looking for a book that's a bit of a challenge but has some interesting history behind it- I would definitely recommend this one!
Posted by Paula A at 12:00:00 AM