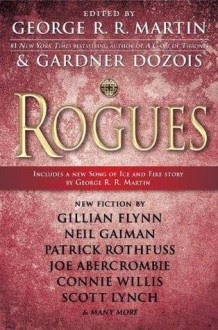 Title/Author: The Lightning Tree by Patrick Rothfuss (part of the Rogues anthology)
Publisher/Year Published:  2014 by Batnam
How I got this book: The Library
Why I read this book: My cowoker said it was good :)
Rating: 4.5 stars

I started reading The Kingkiller Chronicles about three years ago at the insistence of one of my friends who wanted a female opinion on the first book. He said I would like it because there was some romance in it (my predominant genre), but honestly I liked it way more for the fantasy. Rothfuss' world is so unique. I love the world building here and I can't get enough details. So far there are only two books out in the main series (The Name of the Wind and A Wise Man's Fear respectively), with a spin off type character-centric prequel book coming this fall. But we have another cool glimpse into the everyday workings of the world with this newest entry, The Lightning Tree.

The Lightning Tree focuses on Bast, a sidekick of sorts to our hero. It literally just follows what he does throughout his day, which I kind of really enjoyed. We got to see a little bit more of how his brain works and how he can use his Fae skills to manipulate and trick the world around him.

Mixed in this light day are some serious concepts. There are few more details given in the world, but more importantly we get to see what Bast is capable of on his own without Kote to hover or, you know, be the main character. I liked that.

I had some problems with it, though. Primarily since Bast is Fae he sleeps around a bit... which you know more power to him I guess, but it's like three in a day man? It's just icky and at points a little manipulative. But I guess that explores his character more and shows just what he does to get his end goal.

Personally a funny story I had around this one was my coworker mentioned something to me after he read it of something in this story changing the way he saw the whole series. So I read with a careful eye. I talked to him today about it and he had no idea what the hell I was talking about. Talk about a sadness... maybe I dreamed it... who knows.

So, is it worth a read? Yes, if you are a fan of the series. It's quick and fun (ish) and just a nice glimpse into the psyche of Bast. The series is great, by the way. I eagerly await the next installment, hopefully due out sometime this decade. :)

I still have this anthology out from the library. Has anyone read any of the other stories from it? Which are ones I should not miss?