To learn more about Top Ten Tuesday or see a list of future topics click here! This week is a Rewind so Kimberly and I decided to just do a Freebie and talk about dead authors and characters we wish had Twitter accounts! 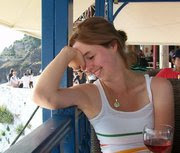 1.  Dorothy Parker--I think she would totally rock Twitter with all of her fabulous one-liners and quippy remarks.  Parker embodied the phrase "brevity is the soul of wit."  She knew how to turn a phrase.  She had an interesting outlook on life and I think would have been very interesting to follow...kind of in the gallows humor kind of way.

2.  Ernest Hemingway--His wry observations on life and a record of his travels to bullfights and safaris in Africa would be super interesting to read.  I could totally see him saying something abrasive and controversial and getting embroiled in a major storm.  And it would be great.

3.  Hunter S. Thompson--His tweets would probably be a bit convoluted on account of the drugs, but I think that they would be very interesting.  Especially when I think about live-tweeting Fear and Loathing in Las Vegas.  He was a great commentator on events in America during a time of great social change and I think that seeing his unedited opinions on things would have made for some great reading.

4.  Holly Golightly--I don't know that she'd be the best at Twitter--I could see her updating every now and then--but I think her tweets would be interesting.  I think that Holly lived a difficult, but interesting life with all of those parties and adventures.  I admire her ability and willingness to just pick up and leave whenever the room got a little hostile.

5.  Oscar Wilde--I haven't read much by Wilde, but he's another one who made these great, wry comments about life and people, so I think he would be worth following.  I think he would have a lot to say about culture, art, and food--which would make him rather versatile.

1. C.S. Lewis- I'm watching the second Chronicles of Narnia as I type this... I love his little bits of inspiration that are sprinkled throughout his novels, I feel like seeing tweets from him in my twitter feed would make me smile on a daily basis.

2. Cress (The Lunar Chronicles)- Cress is hilarious. And spastic. I want to see what she'd tweet. I think I'd spend most my time laughing.

3. Hazel Grace (The Fault in Our Stars)- Well, from what I've heard and kinda seen, she's Tumblr in the form of a girl. So imagine what her twitter account would look like? I think it would be a mix of humor, and wry observations of life. (Probably something similar to John Green's twitter)

4. A (every day)- Just imagine the insight we'd have to A's life! And the diverse type of tweets we'd see! Actually, I think I heard a rumor that there was a twitter account for A... I should check on that.

5. J. R. R. Tolkien- Now, he might have had a difficult time sticking to the character limit, but I feel like seeing tweets from him would have made my day.