All About The 90's Today + Giveaway

Today we have Beth Bloom, author of Drain You (published this year by HarperTeen), on the blog today being totally rad and talking about the 90's with me -- the decade in which her book Drain You was set! 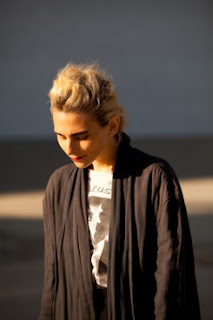 About Beth: Bloom's first short story “Love And Other Catastrophes: A Mix Tape” was featured in Story Quarterly and selected by Dave Eggers for inclusion in The Best American Nonrequired Reading: 2003 (Houghton-Mifflin), which he curates annually. Bloom is the founder of underground dance label 100% Silk (profiled here in LA Weekly) AND the producer/lead singer of the band LA Vampires (written up in The Guardian as well as Pitchfork and Fader). Her next book will be published through HarperTeen.

M. Beth lives on the east side of L.A. where she indulges in raw fooding, magazine subscribing, thrift shopping, Sunday matinee'ing, and ladies book clubbing."

I think LA, because it's such a major city, is generationally really vivid, to a specific degree. Every decade here people can associate with changes in Hollywood, music styles, in landscape and architecture, so many trends and fads, etc. I grew up in the 80's and 90's, and I'm sure the 80's were awesome in their own way but it was during the 90's that I was a little older, and paying more attention. For me, being a teenager then, the mall, the fast food joints, the health food stores, where it was cool to hang out and what it was cool to do – these things are just emblazoned in my memory. So when I imagine a teenager's life in the most vivid possible way, and think about what I can conjure the most realistically (to the point where the setting and the place are almost like another character), there's no question: that's the mid-90's, Los Angeles.

First off, it has to be said that there's a serious difference between the 'best' movie of the 90's and the most definitive movies of the 90's. They're not the same thing, obviously. But for me: Singles and Reality Bites and Before Sunrise. They are each so evocative of what it felt like to be Generation X, which is basically the 20-somethings of the 90's. In each of these movies you feel like you are in a really 'complete' reality. Of course, it's not true, and i'm sure anyone would tell you that's not the experience they had! But still, it feels like it was the first time these filmmakers thought to focus on and feature certain micro-scenes and sort of hip sensibilities that weren't really being depicted in mainstream film at that time. The casual outsiders; the people who went to college but couldn't find good jobs afterwards. That Clinton era vibe of "everything's fine but why am I so bummed or whatever?" There's that defining mix to the Generation X mood of being privileged and intelligent, but also kind of of lazy, and full of gripes about the world.

I think these 3 movies feel like a non-fantasy version of what the 90's were for a lot of young people. Singles because it captures that confusing, emotional phase of life when you have to get your first apartment, and your first non-menial job, but set against the backdrop of grunge, which was one of the most defining and emblematic styles of the decade. Reality Bites because it's about 'selling out,' which is an issue young creative people used to worry about a LOT (the differences and tensions between actual 'art' and MTV/commercialism). And Before Sunrise because of the simplicity and the gentleness of the love affair – how it's not fake, big stakes movie love, it's just 2 people having a great conversation, an amazing date. The tone just fits in perfectly with the 90's cultural landscape of slam poetry, neo-existentialism, coffee shops. There was that 90's intellectual air that felt almost like the new Beats, questing and 'think-y', which makes sense after the previous decade of bland Republican excess.

For rock music, it would have to be Nirvana. It goes beyond iconic at this point. I think it created SO much of what would become indie music, and indie rock, and it's the birth of introspective weirdness as a 'cool' thing. And also because I think it was so poignant on a lyrics level: this half-poetry, half-inanity that totally solidified the 90's humor/art/post-irony vibe. Mixing an intentionally dumb, sort of goofiness with some really serious thoughts about depression and feminism and injustice and abuse (all sorts of weighty themes) is like the core of the 90's sensibility in rock, and art.

But it's also important to say that it was the GOLDEN era of hip-hop. So you can't dismiss how huge and epic Dre and Snoop were, and 2Pac and Biggie, who together basically owned the decade.

I tend more toward Beverly Hills 90210 because it's such overt camp, and basically sparked what is now the CW and everything we know as teenage soap drama. Also because it dealt with hilarious 'problems of the day,' like steroids on the sports team, or shoplifting. But I think shows like Beavis & Butthead and The State and even Seinfeld, those really feel closer to the actual sentiment of the 90's. That accidentally chic, laissez faire attitude; the idea of being bored as a platform for everything, which is where so much humor comes from. It's also a great time for sitcom families, The Seavers and the Bundys especially.

For YA, I would say Girl, 100%. The narrative tone of that book is spot-on. It's not exactly everyone's experience as a teenage girl, it admittedly is a little 'edgy,' but I think that's definitely a positive. I think it's positive that the lead heroine doesn't have to be relatable or likable, that she can be sexualized and savvy and sassy and self-pitying, because those are all authentic aspects of teenage life. The novel has a simplicity that I think we've lost in a lot of YA, because it's very low concept. It's very much a lifestyle book, just about 'being.' No paranormal, no time travel, no supernatural. It's a raw, simple, coming-of-age story, and it's very powerful for that reason.

But for adult literature/non-YA, it's a different story. The quintessential 90's book for adults, I think, is American Psycho. Even though it's set in the 80's, and about the culture of the 80's, in many ways the book originated that rolling 90's literary aesthetic of being bold and ironic and double-meaning. The way it holds a magnifying glass up to the near-past, and harshly judges it, is almost like a mocking of the novel. So many chapters are plotless, just strange, sprawling characterization, which gives it kind of a 'meta' feel, and it's not hard to see the book as a seed for the style of so many present day McSweeney's authors. Subverting commerciality for the sake of the author's 'fancy' has rarely been executed in such an effective but high-art way. 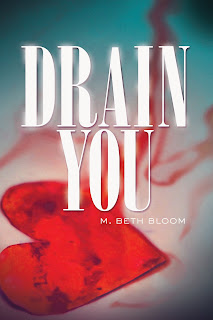 About Drain You: Summer. The 90s. The rich, sun-bleached neighborhoods of the Los Angeles canyons. Enter Quinlan Lacey, a cool, bored, sarcastic, sexy 17-year old with a dull part-time video store job and a mild case of teen ennui. That is, until she meets the alluring, River Phoenix-esque James, and realizes the hills are alive with the undead. Inspired more by the early, dry L.A. short stories of Bret Easton Ellis than the current crop of serialized vampire fiction, the supernatural grunge romance, Drain You, narrates the headaches and heartbreaks Quinn undergoes in her quest to stay sane and cool and in love and alive.

Publisher's Weekly review: "Bloom debuts with a languid, stylish novel that reads like a love letter to cult vampire flicks like The Lost Boys, the work of Francesca Lia Block, and Southern California in the 1990s."


Check out the trailer for Drain You!