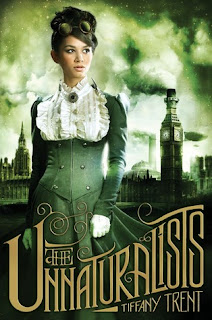 Title/Author: The Unnaturalists by Tiffany Trent
Publisher/Year Published:  August 2012 by Simon & Schuster BFYR
How I got this book: The Library
Why I read this book: You can read my whole first impressions at my View from Page 30 post
Rating: 3 stars


In an alternate London where magical creatures are preserved in a museum, two teens find themselves caught in a web of intrigue, deception, and danger.

Vespa Nyx wants nothing more than to spend the rest of her life cataloging Unnatural creatures in her father’s museum, but as she gets older, the requirement to become a lady and find a husband is looming large. Syrus Reed’s Tinker family has always served and revered the Unnaturals from afar, but when his family is captured to be refinery slaves, he finds that his fate may be bound up with Vespa’s—and with the Unnaturals.

As the danger grows, Vespa and Syrus find themselves in a tightening web of deception and intrigue. At stake may be the fate of New London—and the world.

I did finish it, and it wasn't too bad. Unfortunately it wasn't too brilliant either and suffered from a few problems. The thing is they were not huge problems; it was a bunch of little problems that added up and just bothered me.

First of all some praise. YAY! No love triangles *dances*!! And YAY! A standalone book!  Damn it, I checked the authors website and that is no longer true. Of course there is a sequel.

Anyway, what I liked was the story. I liked the world. I thought it was super imaginative and really neat. Unfortunately, I didn't really have a chance to experience it. You see, the plot flew by faster than a speeding bullet. I mean there was really no downtime to the action. something was always happening. And because of that I never really got to know the characters outside of when the action was taking place. So this fast plot shallowed my connection to the characters. It seemed like the plot was driving the characters instead of the other way around.

This made me a little sad because all of these characters have potential. We just didn't get enough time with them.

One thing that I think helped with this disconnection was the switching POVs. Not only did we constantly switch between Syrus and Vespa, but we switched from first person present to third person past. It really bothered me and jarred me out of the story on more than one occasion.

I guess the good thing about the second book is that Ms Trent may have more time to develop this really cool world to get us to better understand it and also the characters within.

The other thing I really did like was the subtle nod to the Chinese culture. I'd love to see that expanded in future books, since they are going to exist. But overall, if you like steampunk and/or need a break from the normal YA fare, I would recommend you read this. But go into it with a grain of salt.

Email ThisBlogThis!Share to TwitterShare to FacebookShare to Pinterest
Labels: 3 stars, Julia, steampunk, YA