New Contributor - Get to Know Bridget

Hi, I’m Bridget! I’m so excited to be writing for The Broke and The Bookish—I’ve been following for quite a while! Here are my answers to some fun interview questions.

What is your dream bookish job?
Shoot, if I could be Stephen King’s editor or his blurb-writer (if that’s a thing), I think I would die of happiness. Not only just because I love his books, either; he just seems like a really great person from what I’ve seen/read of him. But since that will never actually happen, I would settle for being a reviewer for a publication and more or less getting paid to read. I used to want to go into publishing but not so much anymore. So basically my ideal is probably doing reviews part-time for extra money while also slaving away in the non-profit sector as I do now.

Do you have any authors whose books you'd put on an "auto-read" list...no matter what they wrote?
Stephen King, for sure. A few years ago I probably would have said Dean Koontz as well, but he hasn’t been living up to my expectations with his past few books. Most likely J. K. Rowling, depending on how this non-Harry Potter book of hers turns out. And definitely Jane Austen, if she was still alive and writing (or if they ever find any more of her unpublished works).

Favorite place to shop for books?
All bookstores are magical, but for different reasons. Sometimes I crave the clean, wide open spaces of a Barnes & Noble, or I want to get something immediately and/or in hardcover, and you can’t deny that “new book smell” is awesome. Other times, if I’m just looking to browse or I’m looking for a book that I don’t want to pay full retail price on in case I don’t like it, I’ll find a used bookstore. The musty, cramped, you-never-know-what-you-might-find excitement of a used bookstore can be really fun! The same goes for library book sales—when I was at school in Boston I used to love going to those. And finally, it’s nice to be able to shop on Amazon sometimes just because then I don’t have to move my lazy butt off the couch and the books are delivered straight to my door. :)

What does your bookshelf look like and how do you organize it?
Here’s one of them: 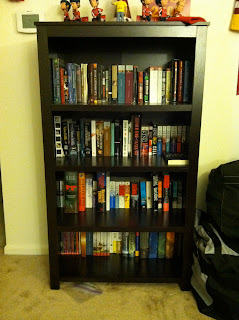 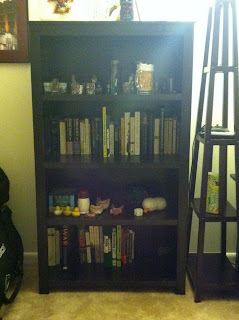 My boyfriend and I live together so these are shared bookshelves. The first is entirely fiction, organized alphabetically by author, and the second is a mix of the rest of the fiction we couldn’t fit on the first shelf and non-fiction, which is organized by subject. We’re going to need another bookshelf for my boyfriend’s giant stack of dental school textbooks, which is currently taking up the space by the window: 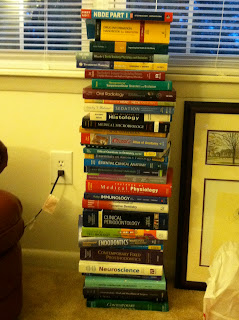 How do you balance reading and school/work?
I try to make a conscious effort to read something every day, even if it’s not necessarily a book—I love Slate.com and can always find an interesting article if I need a five-minute break at work! But I do try to bring my books to work with me to read on my lunch break, and my boyfriend and I generally like going to bed early to read together.

Are there any types of books you WON'T read?
I refuse to read any of that “paranormal teen romance” stuff that has been clogging up YA shelves these past few years. I didn’t really get into YA until after I was sort of past “the age” for it, but I love dystopian series like Divergent and The Hunger Games. I also don’t really go for romance generally, but that’s just because I burned myself out several years ago on V. C. Andrews—that was literally all I would read pretty much from the ages of 12-15. Luckily I found Stephen King right around then and haven’t looked back.

Do any of your friends, family or significant other share your passion?
My boyfriend and I are both pretty voracious readers. Our tastes differ quite a bit, though. He’s very much into non-fiction (he’s incredibly smart and is constantly on a quest to “learn a little bit about everything”), especially about the Civil War or anything written by A. J. Jacobs. We’re both huge Jane Austen geeks, and he’s also a big Oscar Wilde fanboy. I’ve gotten him into Stephen King in the past few years, but he’s had rather less success with getting me into his favorite genres, although I do enjoy A. J. Jacobs quite a bit as well. Most of my friends are also hugely book-nerdy like me. Other than that, though, neither of my parents are big readers, and my younger sister (she’s 20) literally only JUST started reading for pleasure earlier this year when I bought her a boxed set of The Hunger Games.

And for a few facts about me…

The basic: I’m a 2011 Boston College graduate, double major in Linguistics and Communications. I won’t be 23 until November but I am for whatever reason often convinced that I already AM 23. My family is huge and exhausting. I live with my boyfriend of almost four years in Anne Arundel County, Maryland and work as a Community Manager with the American Cancer Society. I am strangely proud of the fact that I was a sousaphone player in the marching band in college (hey, we had some really cool experiences, like the one below...the Dropkick Murphys invited the band to play at their St. Patrick's Day concert at the House of Blues in Boston, and the sousas got to go up for an encore).

The bookish: I have loved books since before I could read. I apparently used to memorize my childhood books to such an extent that I would reprimand my parents for skipping pages when they wanted to be done quickly. Other relatives quickly discovered that this was a great way to amuse themselves and they would read every other word just to make me crazy. (When I was a toddler. And they wonder why I’m messed up.) I’m slowly coming around to the concept of an e-reader and I’ll probably get myself an iPad sometime around my birthday (I’ve used iBooks on my phone and I actually like it quite a bit, especially because you can actually “turn” the “pages,” unlike on a Kindle). Retail therapy, for me, much more often consists of buying books than buying clothes.

The random: Styrofoam really freaks me out—I hate touching it, I hate the sounds it makes, I hate everything about it. One of my life goals is to learn at least one musical instrument from every “family” (i.e. woodwind, string, percussion, brass, etc.) and ideally dabble in all of them, or at least the ones in a traditional orchestra. I have a HUGE thing for men in uniform (my boyfriend is Army and most of the men in my family have been in the service at one point or another). I am DYING to own a Bernese Mountain Dog because aren’t they just the fluffywuffiest things EVER??

So um…I guess that’s it about me. I’m going to go look at pictures of Bernese Mountain Dog puppies now. If you'd like to learn more about me and see some of my writing, you can check out my blog here :) Thanks for reading!
Posted by Bridget at 10:00:00 AM