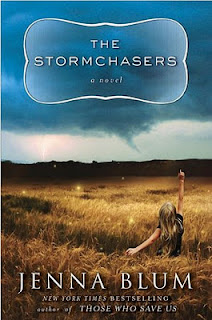 
As a teenager, Karena Jorge had always been the one to look out for her twin brother Charles, who suffers from bipolar disorder. But as Charles begins to refuse medication and his manic tendencies worsen, Karena finds herself caught between her loyalty to her brother and her fear for his life. Always obsessed with the weather-enraptured by its magical unpredictability that seemed to mirror his own impulses- Charles starts chasing storms, and his behavior grows increasingly erratic . . . until a terrifying storm chase with Karena ends with deadly consequences, tearing the twins apart and changing both of their lives forever.

Two decades later, Karena gets a call from a psychiatric ward in Wichita, Kansas, to come pick up her brother, whom she hasn't seen or spoken to for twenty years. She soon discovers that Charles has lied to the doctors, taken medication that could make him dangerously manic, and disappeared again. Having exhausted every resource to try and track him down, Karena realizes she has only one last chance of finding him: the storms. Wherever the tornadoes are, that's where he'll be. Karena joins a team of professional stormchasers-passionate adventurers who will transform her life and give her a chance at love and redemption- and embarks on an odyssey to find her brother before he reveals the violent secret from their past and does more damage to himself . . . or to someone else.

Tornadoes.  They scare me.  A lot.  Luckily they rarely occur in New England.  However, I have been down south enough to experience the scare of tornadoes.  I've never seen one (and hope I never do!) but I have been close enough to hear the sirens go off, woken up at 4 a.m. and been told to go hide in a bathroom and see the damage the next day.  Scary, scary stuff.  Reading about active tornado cells and the characters going after tornadoes definitely made my heart rate go up!

I was really interested in the twin perspective of the book.  When I was little I always used to wish I had a twin.  I think this was mostly due to watching way too many Mary-Kate and Ashley movies (Passport To Paris was hands down my favorite).  I always wanted that "twin connection" with another person.  Someone who knew what I was feeling even though we apart.  Unfortunately I thought that the twin relationship in this book was a little on the grotesque side.  It just felt uncomfortable reading about it at times.

Another thing that bothered me in the book was the over-hyped "big secret".  When the secret is finally revealed it does explain a certain behavior of Charles.  You do understand why he acts a certain way but I was expecting a huge consequence to the secret being told.

Karena joins a storm-chasing tour in hopes that she can find her brother.  I was surprised to learn that these type of tours legitimately exist!  Talk about adventure tourism.  Would you ever sign up for a week long storm-chasing tour?  I wouldn't!  I'd be on pins and needles for a week.

Overall, this was a good book...but I was expecting more.  A few years ago I read Blum's first book, Those Who Save Us, and loved it.  It was horrifying and tragic but such a great story.  The Stormchasers is a good book, but not on the same level as Those Who Save Us.
Posted by Jen at 12:00:00 PM