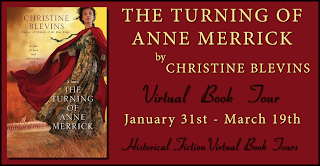 Okay, so last week I gushed about how the early 1800s is one of my favorite time periods to read about, but Revolutionary America is right up there as well. As silly as it may sound, watching the movie The Patriot really got me into history and reading all kinds of historical fiction. In Christine Blevin's new book, The Turning of Anne Merrick, we get a great book set right in the middle of the action surrounding the American Revolution.

This book is technically part of a series, but it can stand alone. I was only able to read a small part of its predecessor, The Tory Widow, and was not confused jumping into this one. In my opinion, this book is much more action-packed and faster paced than the other. Anne Merrick is a rebel spy in a British war camp; she sends sneaky notes to the Americans on the what the British are up to. Getting into the lives and minds of the British during this war was so interesting, as usually we only see things from an American perspective. I thought it funny how they still went to balls, plays, and fancy dinners -- in Anne's words, "as if they'd already won the war."

Anne herself is a great heroine, she's very likable and brave, but I really think that the secondary characters are the stars. Sally, Anne's Scottish servant and friend, is my favorite. She's sassy, fun, and has the best lines in the entire book. Titus and Pink, freed slaves, are great companions to Anne too, but Jack, Anne's love interest, takes the bait. What a hunk! Some of the officers and their wives in the British camps are really spectacular as well. I loved the wide array of personalities and characters in this book.

As I said before, there is so much action here! I was in my Postcolonial Theory class (ironic, huh?) reading a bit about Anne barely outrunning and escaping from British soldiers on horseback -- I was seriously so nervous and out of breath while reading. I can't wait to go back and finish The Tory Widow. Overall, The Turning of Anne Merrick is a GREAT historical fiction book for all, and it doesn't hurt that the author, Christine Blevins, is a lovely person as well. Highly recommended!

Giveaway!
This may be the coolest thing I've ever seen. If you love all things historical, like me, this is the giveaway for you. (Click the picture to get a closer look). 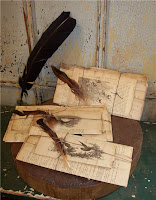 "18th Century Stationery – just the sort of sundry Anne Merrick peddled to those bloodyback scoundrels in Burgoyne’s camp.  Supplied with a quill pen and wrapped for convenient stowing amidst your gear, these sheets and envelopes are perfect for scrieving all manner of secret messages – invisible ink not included."

How awesome is this? This giveaway is international, click HERE to enter! You have until February 22nd.
Posted by Kelly A. at 12:54:00 AM